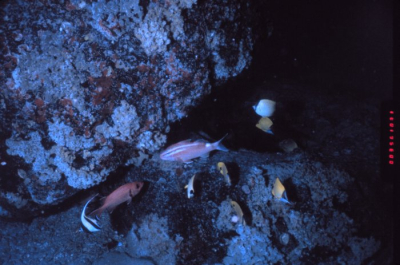 Creatures living at the bottom of the sea get much of their food from those that lived above and died. This bio­logical detritus slowly descends to the sea floor. In the language of the trade, "pelagic organisms are a trophic resource for benthic ones." Marine scientists Dell’Anno and Danovaro at the University of Marche in Ancona, Ita­ly, report that a significant component of this food re­source is the DNA from dead organisms that lived on higher levels of the ocean. This DNA that rains down like manna amounts to about 107 metric tons per year world­wide. Being rich in phosphate, it supplies the prokaryotes in deep-sea sediment with about 47% of their need for this element (but only 4% of the carbon and 7% of the nitrogen). This is a key nutritional resource, as the authors suggest. By a couple of criteria, direct measurements and nuclease sensitivity, most of this DNA is extracellular. So abun­dant is this DNA that it amounts to six- to eight-fold times that contained in all the organisms in the top 10 cm of the world’s marine sediments. Not much is known about the rate of descent of the DNA through the vertical water column.

As the authors say: "DNA… is typically viewed only as the genetic material associated with living biomass." Besides food, is there any other role for DNA in the benthos? It seems possible that DNA that escapes degradation by nucleases could be taken up by competent organisms. If so, horizontal gene transfer would have a "vertical" component.

It is not just DNA from deceased organisms that drifts down (ever so slowly)from upper levels of lakes and oceans to enricch the depths and eventually sediments. Undoubtedly the complex remains are processed one way and another on the way down and several raally durable polymers may surviive long enough to perform other functions more than feeding the planktonic populations. Among them are polymeric forms like peptiiddoglycans.It is worth adding that these are ligands that take up and exchange metal ions forming a mechaniism of transport of metals. Maybe this is a mechanismm allowing the concentration of metals in some horizons for later transport and concentration as ore bodies. Maybe the matal concretions in lake and ocean bottoms have some such origin. Certainly Terry Beveridgge showed years ago that iisolated bacterial cell walls can be assembled into a column which then forms an effective exchange column for metal ions.