Certain large underground caverns owe their majesty to the biochemical action of tiny bacteria. In many parts of the world, caverns are formed by the dissolution of calcium carbonate deposits by sulfuric acid (this is known in the trade as “sulfuric acid speleogenesis”). Such microbial mining formed the Lechuguilla Cave in New Mexico, the deepest cave in the continental USA with 184 Km-worth of passages, and so was the most celebrated of our caves, Carlsbad Caverns.

Until recently, it was thought that sulfuric acid arose spontaneously in caves from the seepage of hydrogen sulfide and its oxidation in air... 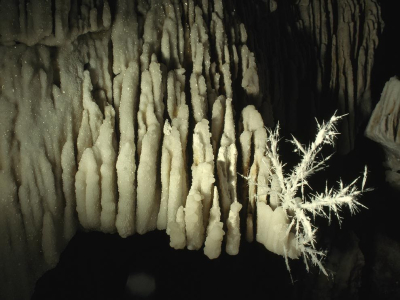 It turns out that not much H2S seeps through freely. In­stead, most of it is converted to sulfuric acid by the me­tabolic activity of sulfide-oxidizing bacteria. They do this: H2S+2O2→H2SO4, and CaCO3+H2SO4→CaSO4+H2CO3. Calcium sulfate-gypsum-is more soluble in water than calcium carbonate and is thus more readily washed away, leaving a hole in the ground. This finding was first reported by Engel, Stern, and Bennet in the journal Geo­logy. They noted that in the outflow springs displayed microbial mats that were up to 17 m long. One thing led to another, and they found that the loss of sulfide from the water could best be accounted for by microbial oxi­dation. Using fluorescence in situ hybridization (FISH), they found an abundance of filamentous ε-proteobacteria and γ-proteobacteria.

Following up on such work, Macalady and colleagues report conspicuous white biofilms on the surfaces of streams in a cave in Italy, between Venice and Rome. Using 16S rDNA libraries, they showed that proteobacteria were again the predominant organisms, with most of the biomass represented by the sulfur inclusion-containing filamentous Beggiatoa and Thiothrix. The domi­nance by these species may be due to their preference for the relatively high oxygen concentra­tion found in the cave streams. The authors estimate the corrosion rate of the cave walls to be about 5 cm/1000 years, which is formidable over geologic times. The sites of collection were ac­cessible via “technical caving routes,” which sounds to me like serious spelunking. The authors point out that actively forming caves of this sort are relatively rare and, being isolated ecosystems, present unique opportunities for investigation. Here life does not depend on sunlight but on the oxidation of inorganic chemicals, in this case sulfur compounds.

As a microbiological chauvinist, it does my heart good to realize how prominently microbes figure in geological circles. Papers on microbes are common at the meeting of the American Geological Union (AGU) and in their journals. Geologists are well aware of the role of microbes in shaping and reshaping this planet: microbes are miners, masons, and messengers. I’m not sure that many mi­crobiologists are aware that Microbial Geochemistry is such a robust science. But we may also take pleasure in the microbial origins of grand sights.

You've brightened my day. Wonderful site. It's about to go on my favorites list.