« So, What Else is New? | Main | Bacterial Physiology in Unexpected Places »

All in the Family 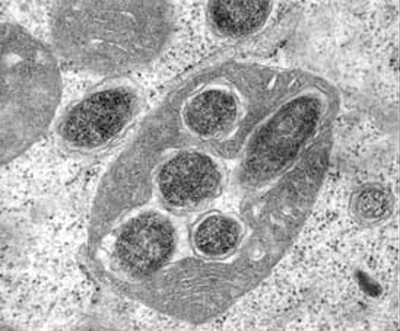 TEM of 'Candidatus Midichloria mito­chondrii' inside a mitochondrion. Cour­tesy of L. Sacchi, University of Pavia, Italy.

In Spanish or Italian,"colmo" means that something has truly reached the limit, the last straw. For endosym­bionts, this can be claimed by bacteria that live not just inside host cells, but within their mitochondria. El colmo! This unusual symbiosis has been found in the cells of the ovaries of the Ixodes ticks that carry Lyme disease. The mitochondria of these cells are quite large and can rea­dily accommodate their guest bacteria. This finding is not entirely new. In the 1970’s, endosymbionts were report­ed residing in mitochondria, first of ciliates and later of ticks. A recent paper reports the genomic identification of an endomitochondrial bacterium, which turns out to be­long to the Rickettsiaceae...

This is a group of alpha-proteobacteria that includes the agents of typhus and spotted fevers and is more distantly allied to the Anaplasmataceae that include other insect endosymbionts such as Wolbachia. The name proposed for this bacterium is Candidatus Midichloria mitochondrii. The middle term is amusing – it refers to the "midichlorians" of Star Wars, microscopic entities that live within cells and communicate with "the Force." No claim is made in this paper that these bacteria are in touch with the Jedi. No matter, these findings present us with a strange family relationship. Mitochondria are believed to be derived from rickettsiae, so this smacks of an incestuous relationship.

It gets even better. The bacteria do not penetrate the interior of the mitochondria but are content to reside within their outer membrane and to develop in intermembrane or periplasmic space. There they multiply at the expense of the mitochondrial matrix, as reported here. This is reminis­cent of the way the predator bacteria Bdellovibrio attack their prey (see Talmudic Question #3 in this blog). 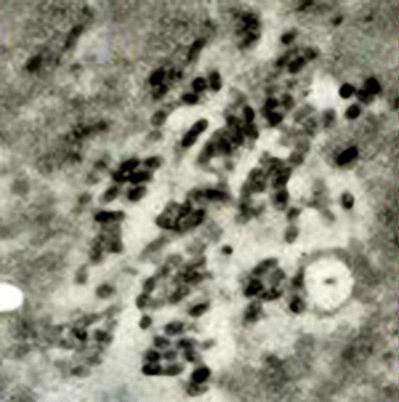 Micrograph of a nucleus packed with ri­ck­ettsiae.

Now for a confession: I got so carried away by the intra­mi­tochondrial symbiont story that I forgot that rickettsiae can also be found within the nuclei of their host cells. In fact, I had seen this startling fact with my own eyes. Here is my story. In 1954, a fresh Ph.D., I had been drafted and sent to Walter Reed Army Institute of Research, where I was to work under an eminent rickettsiologist, Joe Sma­del. In those days, it was not entirely clear whether rick­ettsiae (and chlamydia, for that matter) were bacteria or viruses. There were even whispers that they might be an intermediate group. Smadel was clearly tired of this kind of talk and proposed that I solve the problem once and for all by observing rickettsiae in living infected cells and following individual organisms to see if they divided by binary fission. They did. While I was snapping pictures every minute or two, hoping to see the rickettsiae do their things, I saw all sorts of interesting things. Among others, there was the amazing sight of the rickettsiae moving around the cytoplasm at considerable speed (this was later explained as being due to the formation of actin tails).

Just as striking was the view of nuclei that were filled with rickettsiae arrayed side by side (see photo). The cells survived this invasion for at a few days and their nuclei continued to look healthy. Again, this was old stuff, but it was fun to see it in living cells. I conclude that rickettsiae have a keen ability to snoop inside cell compartments.