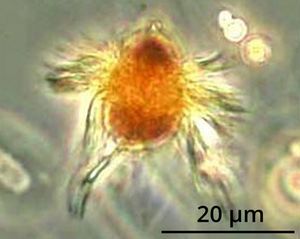 Some marine animals – clams, flatworms, and hydras – have green body parts although that is not their true col­or. Rather, they look green because they have ingested microscopic algae. Inside the animals, the algae act as photosynthetic symbionts, tiny gardens that provide their host with products of their toil. As a variation on this stra­tegy, certain marine predatory ciliates do not bother with the whole prey: they keep the chloroplasts and get rid of most of the rest. This, however, is not a very stable state of affairs because chloroplasts and other organelles like mitochondria have transferred many of their genes to the nucleus and, without these genes, do not endure for long.

So, why not steal the nucleus as well?

That is precisely what some predatory marine ciliates, for example, Myrionecta rubra do: they incorporate both the chloroplasts and the nuclei of their symbionts, in this case small red algae called cryptomonads.

As the result, the ciliates become bright red (to get acquainted with these ciliates and how they move at high speed, see a movie movie) Here's how it works: the alga is taken up whole and its cell membrane is then broken up. The captured nuclei and chloroplasts now remain intact in the cyto­plasm of the host cell. According to a recent paper in Nature by M. D. Johnson, D. Oldach, C. F. Delwiche and D. K. Stoecker, the enslaved nuclei are fully capable of transcription (making mes­sen­ger RNA), which leads to the synthesis of proteins of the photosynthetic apparatus. The algal nuclei work hard and are even more active in captivity than in the free-growing cells.

This symbiotic relationship does not last forever. The impounded nuclei cannot divide and disap­pear from the host cell in about a month. When this happens, the chloroplasts stop working and the host cell eventually stops growing. Thus, maintenance of the chloroplasts depends on the presence of their nuclei. This would seem to be quite ephemeral, perhaps too much so to be of use to the predator. Not so: these ciliates are avid consumer of the algae, thus they periodically replenish both algal nuclei and chloroplasts. As long as they have a meal of algae at decent inter­vals, they will continue to thrive. The authors coined a term for this phenomenon, karyoklepty – the robbing of nuclei.

Why not maintain the whole algal cell instead of playing games with its components? Most likely, the commitment to carry an entire symbiotic cell is more demanding on the host than just making do with its organelles. Anyhow, the loss of organelles may be only temporary because the ciliates are good at eating the algae, thus can effectively replenish their supply of organelle. The authors of this paper point out that these ciliates are abundant in marine environments and even forms dense red tides. You can’t argue with success. As the authors point out, this story may well illu­s­trate a step in the evolution of organelle–host cell relationships.