Prokaryotes by Any Other Name....

Definitions in biology tend to be elusive because they are often peppered with exceptions. Right now, defining prokaryotes (Bacteria and Archaea, cells without a real nucleus) as being different from eukaryotes (cells with a nucleus) is the subject of a lively discussion. One writer of a piece in Nature (N. Pace) does not believe that the pie of living things should be sliced that way whereas others do (W. Martin and E. V. Koonin). The argument centers on the widely accepted view that prokaryotes come in two kinds, the Bacteria and the Archaea. Because the Archaea have signifi­cant similarities with the eukaryotes, it is claimed that the term prokaryote, though cherished by most, is obsolete and misleading and might as well be abandoned... 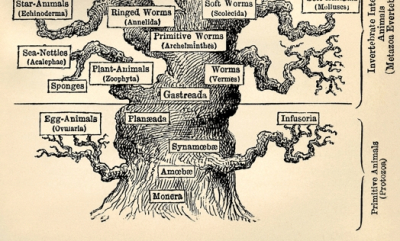 Enter M. F. Dolan and L. Margulis on the side of the pro­kar­yotes, pointing out that eukaryotes eagerly fuse at times with other cells, and that therein lies a big distinc­tion. Eukaryotes, as everyone knows, arose when a pro­karyote swallowed another prokaryote, that is, by estab­lishing a symbiosis.

I am an avid pro-prokaryoticist and will continue to use that term, probably to my dying days. I can attest to how handy it is because in the textbook MICROBE , we used prokaryote or prokaryotic 337 times. Otherwise, we would have had to write Bacteria and Archaea that many times or invent a common noun and adjective for both. However, I am attentive to the difficulty in making all-inclusive definitions in biology. As an example of an exception to a rule, there is at least one known case where a present day prokaryote has taken up another prokar­yote: the gut of mealybugs contains bacteria (endosymbionts) that carry other bacteria within them. More recently it has been proposed that this symbiosis of a symbiont must have taken place repeatedly.

One could argue that this phenomenon is infrequent and that most prokaryotes cannot swallow one another. But, for the symbiotic origin of eukaryotes to have taken place, the uptake of a pro­karyote by another pro­­karyote must have occurred way back then. The partners in the mealybug gut may not be relevant to eukaryotic evolution, but if they can do it, so could others, now or then. Perhaps relevant to the discussion is that there is a difference between swallowing another cell whole (phagocytosis) and two cells fusing (cytogamy).

Bendich and Drlica in a 2000 erudite paper considered the once widely held view that prokaryotes not only lack a nuclear membrane but differ from eukaryotes in other aspects of nuclear organi­zation. They point out that a long list of characteristics previously thought to be unique to eukar­yotes, such as multiple chromosomes, large genome size, linear chromosomes, or presence of histones, can all be found in various bacteria. But, as discussed by Stavans and Oppenheim, dif­ferences in the way DNA is compacted still persist. One would think that another big difference remains, the absence of a nuclear membrane in prokaryotes. Sure enough, there are bacteria (belonging to the Planctomycetales) that have a membrane surrounding their nucleoid. Frankly, though, these structures do not closely surround the nucleoid and thus may not correspond to the nuclear membranes in eukaryotes.

Despite all this, distinguishing a prokaryote from a eukaryote under the microscope most of the time is child's play. Anyway, what is more interesting, the exception or the rule?

I, too, find the term "prokaryote" useful despite the exceptions. It would be easier to justify this usage, however, if we could point to at least one difference between prokaryote and eukaryote that is inviolate (at least so far). In the archetypal prokaryote, translation and transcription are closely coupled in that the ribosomes and the rest of the protein synthesizing machinery associate with the nascent mRNA. Protein synthesis is underway even before transcription has been completed. In the typical eukaryote, transcription is nuclear and the mRNA is transported to the cytoplasm where translation takes place. Have any exceptions to this been found so far?