« Talmudic Question #7 | Main | Everybody Is Always Talking About the Weather... »

Could We Have Started Out as Magnetotactic Bacteria?

There are bacteria that have small magnets within them. Magnetotactic bacteria. The magnets consist of iron-containing crystals lined up in a row along the long axis of the cells, which endows the cells with the equivalent of a magnetic needle. These bacteria thus can sense the earth’s mag­netic field, which tells them which way is up or down. (Over much of the globe, the magnetic field is felt as pointing downwards.) The actual merit in being magnetic has not yet been settled defini­tively. It has been proposed that these bacteria swim along the magnetic field lines to reach the lower strata of the marine sediment. That's where the oxygen concentration is very low, some­thing they may like. The story of bacterial magnetotaxis has captured the imagination of micro­biologists and others alike. 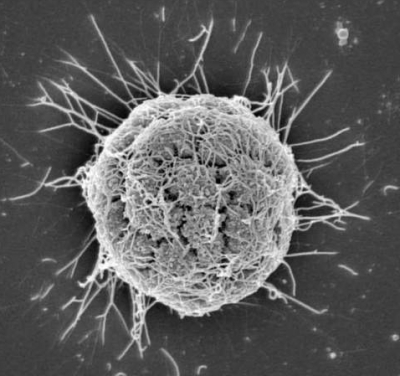 An aggregate of magnetotactic multicel­lular bacteria. Note the prominent, rather straight flagella (SEM).

Most magnetotactic bacteria are unicellular, each indivi­dual going its own way. However, it has been known for some time that some live in aggregates. This is not sur­prising in itself, as many bacteria live in communities and biofilms. But, for the most part, they are not stuck there and occasionally come and go. Here, however, the associ­ation is obligatory, and that is news.

These organisms are exclusively multicellular, apparently the only prokaryotes so far to lay such a claim. The bacte­ria make organized structures, with their cells fitted into a hollow sphere. They look like a ras­pberry or, if you wish, a blastula. But neither blastulas nor raspberries di­vide in half, whereas these aggregates do. Each clump splits into two once its cells get bigger and divide in uni­son. The clumps resemble certain colonial protists, such as some colonial protists. According to a recent article in International Microbiology, no individual cell of this organism has been seen in nature. And, what’s telling is that once the clump has been disorganized in the lab, the cells die (as judged by vital dyes since they have not been cultivated as yet.) Alone, they also cease to be mag­ne­totactic.

A time series of an aggregate undergoing di­vision.

I can think of other candidates for possible colonial be­havior among bacteria. A bacterium called Lampropedia hyalina grows as two-dimensional square sheets. Each sheet divides into “daughter” sheets. However, this may not be obligatory. To my knowledge, nobody has claimed that L. hyalina (or others like it) must grow this way.

A group of Brazilian investigators from the Federal University of Rio de Janeiro have been studying these multicel­lular magnetotactic bacteria from a nearby hypersaline lagoon, but these multicel­lu­lar bacteria are also found in many other places. The bacteria studied by the Brazilian researchers belong to the deltaproteobacteria.

How do these organisms maintain their magnetic moment while being spherical? The an­swer, ac­cording to the authors is that the cells are arranged along a helical path, which, they explain, would make the magnetic moment parallel to the polar axis.

So, why do these organisms have to be multicellular? The authors propose two compatible an­swers. One is that there is something special about the interior content of the spheres that is worth shielding from the exterior. The other is that the aggregates are too big to be preyed upon by grazing protists. This appealing idea has been suggested to explain the origin of multicellular organisms. Whatever the reason, this kind of obligate multicellularity may have been the begin­ning of something big.

Call me a prokaryote chauvinist, but at times I wonder: did eukaryotes invent anything?

The figures are courtesy of Prof. U. Lins, Rio de Janeiro, Brasil.

Amazing to see where science is taking us these days. I definitely prefer the term blastula, Moselio. ;]