« Could We Have Started Out as Magnetotactic Bacteria? | Main | Time Lapse Stink (from the Cornell Mushroom Blog) »

Everybody Is Always Talking About the Weather... 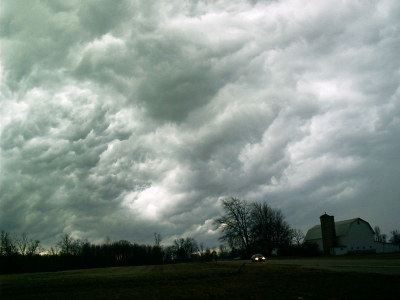 ...but bacteria are actually doing something about it. For starters, we realize that bacteria play an important role in the climate of this planet. Microbes were the original source of all atmospheric oxygen; they are active in the ni­trogen cycle and in producing and removing carbon di­oxide. As we are painfully reminded every day, to change the atmosphere is to also change the climate. The chan­ges due to microbes may not be as much in the news as the current man-made ones, but the microbes have been responsible for shaping this Earth and they continue to do their important work.

That much is commonly known. What is less well appreciated is that bacteria may play a role in the weather, that is in the day-to-day changes.

Some marine bacteria make large amounts of dimethyl sulfide (DMS), a gas that rises up into the atmosphere. There it becomes oxidized into sulfates and other compounds that cause water particles to nucleate, thus forming clouds.

Where does DMS come from? Bacteria make it from dimethyl sulfoniopropionate (DMSP), a non-volatile compound produced in abundance by marine algae, big and small, who use it to counter the high osmotic pressure of seawater. When these algae are under stress or die, they release their DMSP, some of which is taken up by the bacterioplankton who metabolize it by one of two pathways. One pathway involves demethylation of the DMSP and makes some of the sulfur avail­able for bacterial protein synthesis. The other pathway converts the DMSP into volatile DMS, for what purpose we know not. However, this ability to convert DMSP to DMS is widespread among marine bacteria. Recently, it has been proposed that the pathway for making DMS is not a direct degradation by a lyase enzyme, but rather involves the addition of acyl coenzyme A and the sub­sequent conversion into DMS. 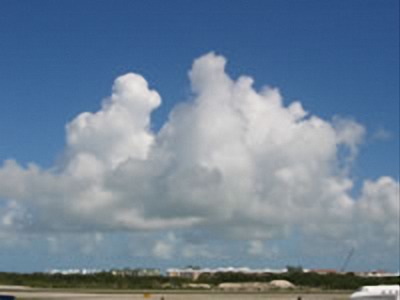 In principle, this should constitute a negative feedback loop: the more DMS is made, the more clouds are formed, the less sunlight shines on the ocean, the less photosynthesis is carried out, the less DMSP is made, the less DMS is produced, etc. And the reverse should be true as well. This mode of climate regulation has been called the CLAW hypothesis (for the initials of its authors), and is still being debated. Of course, large sulfur emis­sions result from the burning of fossil fuels – that being the predominant source, at least in the more industrial­ized Northern hemisphere. This sounds like an argument for burning more fossil fuel and emitting more sulfur. How­ever, this would not meaningfully counteract the greenhouse effect of carbon dioxide and other gases. Still, sulfur compounds in the atmosphere are far from insignificant. They amount to one million metric tons and are postulated to have a turnover time of a few weeks.

DMS is an interesting gas for olfactory reasons as well. It attracts small crustaceans, such as cope­pods, and seabirds, such as petrels to areas where the food supply is abundant. As we experience in our bathrooms, DMS of intestinal origin has an odor that is unpleasant to humans. However, in a different context, it contributes to the complex fragrance of sea breezes often lauded in romantic rhymes.

With the superb editorial help of Merry Youle. Photos courtesy of the National Oceanic and Atmospheric Administration.

It is interesting to know that DMS is an attractant for copepod crustacea. The association reminds me that the work of Colwell et al. showed that an important retreat of the cholera bacillus is in copepods and filtering them out through multilayers of sari cloth is a helpful protective measure in cholera-ridden regions. Is it possible that emission of modest amounts of DMS by bacteria including the Vibrios encourages or facilitates that association. I remember my old Professor who worked in India on cholera would wonder out loud "Where does cholera go in the winter?" Do we now know, and why?