You Should Be in Films

I spent my career growing bacteria in liquid media. I wasn't aware that my bacteria were plank­tonic, any more than the character in Moliere’s play Bourgeois Gentleman was conscious that he had been speaking in prose all his life. In my artifical planktonic universe, I was somewhat uncon­cerned that in the real world wherever there is a surface bathed in water, you can find an orga­nized community of bacteria – a microbial biofilm. 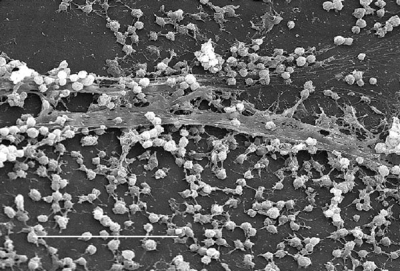 Scanning electron micrograph of a Sta­phy­lococcus biofilm on the inner surface of a needleless connector. Source

For the likes of me, there is much catching up to do, as the subject of biofilms has progressed rapidly, capturing the imaginations of many researchers.

Since biofilms are complex communities composed, in some instances, of hundreds of metabolically diverse spe­cies, we long for simpler models in which we can ob­serve and characterize the interactions. Such a system, a community of two bacterial species, is the subject of a re­cent paper by Molin and coworkers in Denmark and Rai­ney in New Zealand. Most intriguingly, they report that these bacteria evolve differently in biofilm communities than they do in liquid culture.

The participating bacteria were two unrelated soil-inhabiting species: Acinetobacter sp. (which I’ll call A), which metabolizes benzyl alcohol into benzoate, and Pseudomonas putida (which I‘ll call P), which cannot grow on benzyl alcohol but can grow on benzoate. When the two are grown togeth­er in a medium containing benzyl alcohol as the sole carbon source, P depends on A’s metabolism for its food.

The authors compared the growth of P and A in mixtures of the two organisms grown for 24 hours with benzyl alcohol as the sole carbon source in liquid medium versus in a flow chamber wherein they formed biofilms. Looking at the ratio of A and P, they found that at any given concentration of benzyl alcohol, P grew about three times better in the biofilm than in liquid culture. Similarly, the minimum concentration of benzyl alcohol required in order for P to coexist with A was more than three times higher in liquid medium than when growing as a biofilm. What enabled P to grow better under biofilm conditions?

The authors found that the P cells had mutated. Viewing a 24-hour biofilm under the microscope reveals loose groupings of P surrounding discrete colonies of A. Four days later, A and P are seen growing in intimate contact, with a mantle of P cells enveloping the A colonies. When cells from these communities were grown on agar, it was readily observed that these P cells formed colonies with "rough" edges, whereas the original Ps that had not been cultured in biofilms made "smooth" colonies with entire edges. Most telling is that no rough colonies were seen when P was grown alone in a biofilm nor when P was grown with A in liquid medium – only when P and A were grown together in a biofilm.

This inherited visible change in colony morphology is due to alterations in P's lipopolysaccharide (LPS), a major component of the outer layer of the organism. The mutational basis of this alter­ation was supported by identification of two independent mutations in a gene involved in LPS biosynthesis in different rough strains, and by converting a smooth to a rough by introducing a mutation in that gene. One might wonder why the smooth form exists at all, given the enhanced fitness of rough colonies in biofilms. Interestingly, the rough variant was shown to have reduced fitness when grown in liquid medium.

The conclusion is that mutants are selected as the result of their close spatial interaction with the cells of the other species. Being in close proximity helps move things along better than keeping a distance. It is hardly surprising that social relationships influence evolution, but this work shows it experimentally in a system that can be studied in detail.

The authors of this paper say it well: "Biofilm communities might lack the grandeur of a tropical rainforest, but not their complexity, or their significance in terms of ecosystem function."