by Merry and Elio 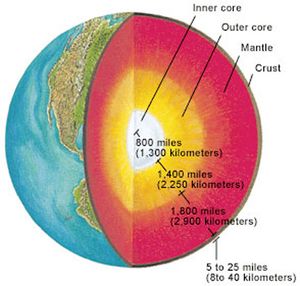 In 1998, a respected astronomer and physicist turned geologist, Thomas Gold, wrote a highly influential book, The Deep Hot Biosphere, in which he argued that there is abundant microbial life in the water within the pores, cracks and fissures of the rocks beneath our feet. Fur­thermore, Gold advanced the provocative notion that hydrocarbons within the Earth were not derived from fossils but rather were created early in the life of the planet by chemical and physical processes below the crust, including radiation. (His 1992 paper summarizing some of these ideas is available.) Taken together, these views suggest that there exists an immense and hos­pi­table underground environment for microbes, complete with liquid water, an energy source (hydrocarbons and hydrogen), and livable temperatures (down to about 10 Km at which point it becomes too hot for even the most extreme of thermophiles). Gold postulated that not only is there life in the neigh­borhood of Vulcan's furnace, but that there might be as much biomass there as on land and sea combined. Not only would this life not need the sun as an energy source, but unlike the communi­ties thriving around the deep sea vents, it could be independent of all photosynthetically pro­duced products (e.g., oxygen), as well.

But how would one go about studying the deep hot biosphere?

How could you find out which microbes might be living several kilometers down and what they would be doing there? Frugal microbiologists wouldn't start drilling at the surface; they'd begin at a deep hole in the ground, such as a gold mine that extends several kilometers down. They'd set up a lab in one of the deep shafts – an uncomfortable place to work due to the high ambient temperature – and take advantage of exploratory drilling nearby to access subsurface water. They would likely have to work under some time constraints because the fissures that yield the water would soon be sealed by the mine's cementing team. 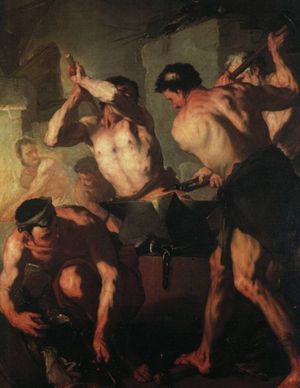 Several studies of this sort have shown that indeed there is abundant microbial life in deep subsurface water. One recent report by an international consortium from Tai­wan, USA, Germany, and Canada presents a detailed ana­lysis of water from a fracture located 3–4 km deep in the Mponeng mine, a gold mine in South Africa. The title of the paper is worth parsing: "Long Term Sustainability of a High-Energy, Low Diversity Crustal Biome." This says that the organisms found have been there for a long time, ob­tain a lot of energy locally, include only a few species, and reside in the earth's crust. The organisms oxidize ("burn") hydrogen, using sulfate (rather than free oxygen) as the oxidizer. Lots of energy is obtained from this reaction. The microbial population numbered 30,000–40,000 cells per ml. Their data about the sampled fracture water in­cluded: initial temperature of >60°C decreasing to 52°C during the 54 day observation period; pH 9.3; age esti­mated to be about 20 million years based on inert gas isotopic analyses. Both the hydrogen and the hydrocarbons present at the drilling site are abio­genic in origin – as postulated by Gold.

Microbiologists will wonder how it was determined that the organisms collected were from the depths, not surface contaminants. The satisfying answer is that the organisms were quite different from those populating the surface water used in the mining process. The subsurface community was dominated by a single organism which, based on its 16S rDNA, was determined to be a re­lative of a Gram positive sporeformer, Desulfotomaculum. Members of this genus are abundant in soils and waters and some have been previously found in subsurface waters. The record for spore resistance to high temperatures (10% survived at 140°C for 15 minutes) is held by members of this genus. (I thank Jennifer Gutierrez for unearthing this fact which had been reported in a disser­ta­tion by Helene Goorissen of the University of Groningen, The Netherlands.)

The authors of this paper propose that the bacteria penetrated the deep water of the Mponeng mine millions of years ago and have lived there in isolation for the duration. They state that this environment is “capable of sustaining microbial communities indefinitely by geological processes.” I imagine that Thomas Gold would have been happy with these results. The sun is not needed for all life.

O thou great star, what would be thy bliss if thou hads’t not those for whom thou shinest?
— F. Nietzsche
Thus Spoke Zarathustra