Those who are underwhelmed by modern technology do not stand alone. A fungus made an "in­destructible" CD inoperable by growing on its edge, devouring aluminum and polycarbonate, and making short shrift of the “information pits,” whatever they are. This particular CD had resided in Belize under conditions of high humidity and temperature – "extreme weather conditions" ac­cording to the inventor of the CD. But with global warming, who knows! Leaving aside further temptation to dwell on the frailties of modern technology, the microbiology here is not without interest. 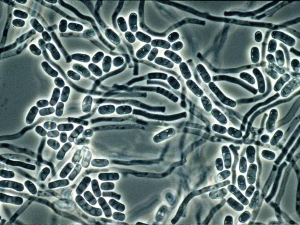 The fungus is a kin of Geotrichum, a common yeast found in the air, in soil, in the human body and in dairy products. The ability of fungi to grow under conditions of very low humidity reminds us that they vie with bacteria for a position of prominence in the world of extremo­philes. But high temperature may or may not have been a factor in CD-phagia, as most Geotrichum strains prefer 25° for growth.

Here's another link to a version of the story in the British newspaper, The Telegraph. For a photo of the "indestruc­tible" CD, click here.

From London, a reader of this blog sent us the images below documenting the result of fungal invasion of his prized CD collection.

Between 2000 and 2002 I had a number of CDs destroyed by what I think might be the Geotrichum fungus. I however do not live in a Belize rainforest, I live in a flat in London, England.

I want to show you a picture of this so let me know how to get it to you..