The Proper Study of Man Is Bacteria

It is of more than passing interest to know which infectious diseases did  beset ancient humans.  Such information may illuminate behavioral and cultural patterns difficult to obtain from other sources.  Thanks to modern technology, it is possible to identify microbial DNAs found in ancient human remains. 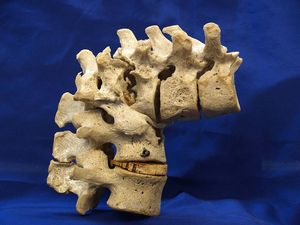 One of the most fruitful investigations has concerned tu­berculosis because mycobacterial DNA sequences have been detected in old bone tissue.  Such sequences were found in about 20% of examined prehistoric skeletal re­mains from Egypt and South America, reinforcing the be­lief that tuberculosis is indeed an ancient disease.

These studies pointed to M. tuberculosis, the human tu­bercle bacillus, as the main culprit. However, a recent pa­per reports finding DNA of M. bovis, the cattle strain, in human bones over 2 millennia in age. These bones were among the more than 1,000 remains found in a large cemetery at Aymyrlyg in Southern Si­beria, including some with suggestive spinal lesions. These were a people known as the Issedon­es; con­troversies about their customs and history make for lively reading.