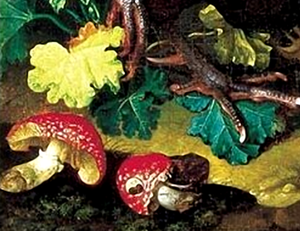 Global warming may have a silver lining, at least for those who enjoy wild mushrooms (for example, the writer of this blog).

According to an article in Science, in the last 50 years ma­ny British mushrooms have doubled the length of their fruiting season, mirroring the rise in local temperature. The authors surveyed 315 species and found that some even fruit twice a year now. This is good news for lovers of wild mushrooms, but is also of interest to ecologically-minded people in general. The emergence of mush­rooms may well indicate an increase in the activity of their mycelial filaments, the vegetative part of the fungus living in the soil and in dead trees. These fungal filaments carry out most of the recycling of vegetable matter on this planet. But before we mushroomers embrace global warming, let us consider the price to be paid for its other likely consequences.