Where to look for very old living bacteria? Ancient glaciers, frozen for millennia, are a good bet. Geologists drilling for core samples retrieve ice dating from hundreds of thousands of years ago, some of which they have made available to microbiologists. A report from Jean Brenchley's lab at Penn State describes the microbial composition of 120,000 year-old ice cores from Greenland. Not only were there plenty of microbes in such cores, but some could be coaxed to grow in the lab. 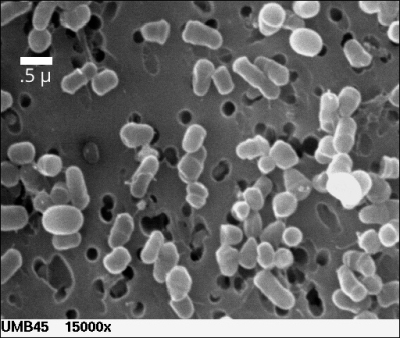 Photomicrograph of nanobacteria from ice cores. Courtesy of V. I. Miteva and J. E. Brenchley.

There is art in the required manipulations, as they in­volve sterilizing the surfaces of the cores, carefully drawing samples aseptically, using a battery of filters, and culturing on anaerobic low-nutrient growth media. Add flow cytometry, microscopy of various sorts, and molecular methods, and you realize that this is not a simple exercise. The results? Cultures of many different bacteria, including Proteobacteria and both high and low GC Gram-positives, some sporeformers. Most of these organisms are very small – able to pass through 0.2 μm and even 0.1 μm filters. This is not work for an impatient microbiologist; colonies do not usually appear until the agar plates have been incubated for several months.

Some of the properties of these nanobacteria are worth noting. Many speed up their growth when subcultured, as if awakened from a long, Rip Van Winkle-like slumber. The very act of filtration al­ters the number of cultivable organisms and the species diversity, increasing both.  The authors ponder that this effect "may be caused partially by the physical separation and detachment of cell aggregates or by the removal of inhibitory substances during filtration." Most of the bacteria re­main small after cultivation, suggesting that this is their intrinsic size and not, as is the case with E. coli and its ilk, a temporary condition due to starvation. Innate small size is a well-known charac­teristic of bacteria in nutritionally fallow environments,that is, the majority of the bacteria on Earth. 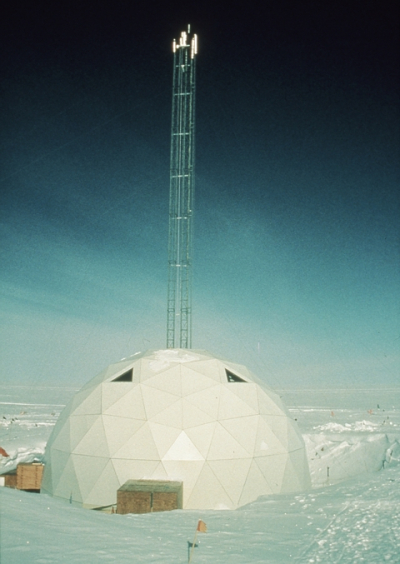 The GISP2 (Greenland Ice Sheet Project drill dome), lo­cated in Greenland, mea­sures 32.5 m across, houses the drill and the lower part of its 37 m tower, and is con­nected via trenches and shafts to the subterranean core processing line. Cre­dit: Mark Twickler, University of New Hamp­shire/ NOAA Paleoclimatology Pro­gram/De­part­ment of Commerce

The ice core organisms may have stayed alive in dormant fashion since the time of emer­gence of modern Homo sapiens. Why the "may?" Because there is a chance that they weren't dormant all that time, but may have under­gone some periods of active growth and division, albeit very slowly. The authors make no claim as to the age of the bacteria, just that of the ice. Determining the age of the bacteria doesn't sound like an easy task (they don't come with birth certificates). Any suggestions?

Glacial ice may seem an unlikely environment for bacte­ria to grow. However, a paper by P. B. Price points out that ice has a "network of micron-diameter veins in which microorgan­isms may utilize ions for metabolism." And that's not all: "ice in contact with mineral sur­faces de­velops a nanometre-thick film of unfrozen water that provides a second habitat… "

Could you use isotope analysis? My understanding (dim at best) is that analyzing various heavy isotopes is used to date the ice itself, so it seems like similar strategies would maybe work with the bugs? For example, molecules that turn over slowly might be expected to have different heavy isotope levels than molecules that turn over quickly. I'm at the limits of my chemistry here, but it seems like something along those lines could work.