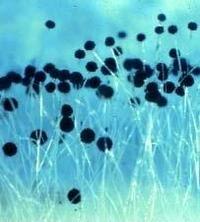 We are used to titillating stories of symbiotic mutualism where the host and the symbiont do amazing things to­gether that neither could do alone. Think of lichens, root nodules in legumes, tube worms in deep sea vents. Such phenomena make us wonder: are there any limits to the evolution of novel adaptive strategies?

Here is an especially exciting example – a symbiont that does not just one unexpected thing with its host but two.

The two partners are a fungus, Rhizopus microsporus, and a bacterium belonging to the genus Burkholderia.

It has been known for some time that this fungus causes a disease called rice seedling blight and that the symp­toms are due to a toxin called rhizoxin. Rhizoxin, it turns out, is not made by the fungus itself but by its endosymbiotic bacterium. This alone would not be all that unexpected (some marine ani­mals also have symbiotic bacteria that manufacture drugs.) Now the surprise: the endosymbiont is also required for the fungus to make spores. If the fungus is treated with bactericidal antibiotics, it ceases to sporulate. Reintroduce the bacterium and sporulation is restored. 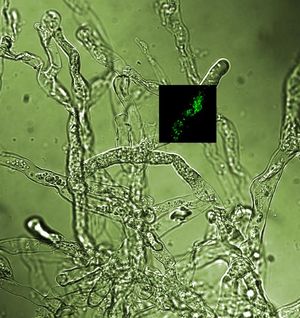 Using Burkholderia labeled with a green fluorescent dye, Christian Hertweck and colleagues at the Hans Knöll In­stitut (Jena, Germany) found the bacteria present not just in the fungal mycelium, but also in the spores – thus en­suring that the symbiosis will continue upon reproduct­ion. Since spores are the main way this fungus propa­gates, it is dependent on its endosymbiont for its very survival.

To return to the other facet of this symbiosis, the rhizoxin produced by the bacterium benefits the fungus via the release of nutrients from the decaying rice plant. The toxin is a polyketide that affects the microtubules in cells within the rice roots, thereby blocking cell division – an action that suggested its possible value as an antitumor agent. Interestingly, when isolated from the fungus, the bacteria continue to make the toxin, however at an ever decreasing rate. This suggests that toxin production is regulated by interaction with the host. The fungus and the bacterium seem to have an active conversation going. Whatever they say to each other, it appears to be for the common good.