A Friend Has a Birthday 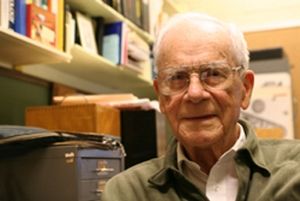 Robert Murray, one of the most steadfast friends of this blog, will soon be honored on his 88th birthday by an ho­norary degree from McGill University.

A professor emeritus at the University of Western On­tario in London, Ontario, Prof. Murray is one of Canada's most distinguished microbiologists, having played a stel­lar role in setting the foundation for the modern under­standing of bacterial cells and microbial taxonomy. He continues to follow in the footsteps of his father, E. G. D. Murray, another eminent microbiologist who was award­ed this same honor by the same institution. No stranger to honors, Prof. Murray is an officer of the Order of Canada, the holder of several other honorary degrees, and former president of the American Society for Microbiology. His own institution has established the R. G. E. Murray Annual Lectureship, held since 1999.

Bob's light touch is revealed in this recent communiqué: "My 'ecosphere' closed system with algae, salt water, and brine shrimp will be 8 years old, and three shrimp are still alive in it. I wonder what the bacteria are that feed them." May he live to see his "ecosphere" thrive for many years to come.