« Fine Literature: Bacterial Shape – Not a Small Thing | Main | A Letter to the Blog »

Caught in the Act

Many heterotrophic single-celled eukaryotes are content to let the algae handle photosynthesis and then eat them. Others have opted for the convenience of having the algae residing in-house, living as endosymbionts within their cytoplasm. Some have taken this a step farther, discarding most of the algal cell, keeping only its chloroplast. In so doing, they also assumed full responsibi­lity for chloroplast maintenance and replication – not a simple task. It would be exciting and edu­cational to observe this transition in progress. Indeed, candidates willing to reveal steps in "going green" have now been found.

In the year 2000, researchers discovered a new microbial eukaryote on a sandy, intertidal beach in Japan, a member of the recently described Katablepharids. The Katablepharids are yet one more group of single-celled eukaryotes, motile by means of their two flagella, heterotrophs that feed on algae. Interestingly, nearly all the cells of this new species contained a large green "chloroplast." They named the species Hatena arenicola. Hatena is Japanese for enigma or "how odd!"

Further investigation disclosed that when Hatena divides, one daughter cell inherits the whole "chloroplast" while the other daughter is colorless.  The "chloroplast" is actually an endosymbiont derived from Nephroselmis, a kidney-shaped green alga abundant in Hatena's habitat.  Gone are its flagella, cytoskeleton, and endomembrane system; degraded are its mitochondria and Golgi apparatus. Its plastid has swollen to more than 10 times its original size and is engaged in very active photosynthesis. Since it is so highly modified compared to the free-living form, its identity had to be verified by analysis of its SSU rDNA sequence.

What about the other daughter cell, the colorless one? It develops a complex feeding apparatus at its apex and then dines on algae like other Katablepharids. Interestingly, cells lacking the endosymbiont were never seen to divide. Instead they ingest a Nephroselmis of the appropriate strain which then transforms into a new "chloroplast." We now see the process of chloroplast acquisition in  motion.  Ingestion of the alga produces drastic morphological changes in both the Hatena host and the alga. The host loses its feeding apparatus. That region is now occupied by the algal eyespot—a light detector and part of the alga's mechanism for phototaxis. An intimate association develops between the eyespot and the Hatena membranes at the cell apex. The researchers interpret this arrangement as evidence that the endosymbiont is guiding the movement of its host in response to light conditions—an important service for this heterotroph turned autotroph. 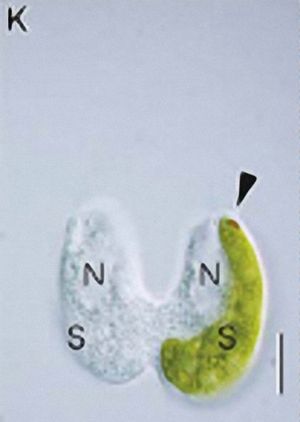 Subsequent cell division yields, once again, one green daughter cell and one colorless one, one autotroph and one heterotroph. Since it is not yet possible to grow Hatena in the lab, this life cycle was inferred from observation of many individuals.

I wonder what lies ahead for Hatena. Will it become a full-time autotroph with a true chloroplast, no longer having any use for its feeding apparatus? Or is it stuck in this cycle, able to divide only when it possesses a "chloroplast" endosymbiont but unable to replicate the "chloroplast" in the process? These are not the only hosts that make use of only selected body parts of their endosymbiont. In some cases, the nucleus alone is retained, a process described earlier in this blog.