« A Phylogeny for a Kingdom | Main | When Fungi Ruled the Earth »

If your answer is Alexander Fleming or Selman Waxman, you would be off by about 50 million years. 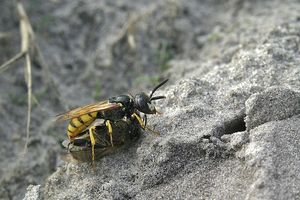 The answer is insects. There are ants and wasps that cul­tivate antibiotic producing bacteria and use them to pre­serve their caches of food. The classic example is the leaf-cutting ants which feed on fungi they cultivate on the well-chewed vegetable matter they bring to their nest.  Well-chewed bits of leaves and flowers should, by rights, be the perfect substrate for the growth of all kinds of fungi. Not so. Only the one fungus that the ants prefer makes it. Other fungi are inhibited by an antifungal an­tibiotic made by bacteria that the ants carry on their cu­ticle.

Now a new story (link updated in 2014) has emerged. A wasp, the European beewolf, harbors an­tifungal-producing bacteria in the glands of their antennae and use them to inoculate their nests, thus protecting their young from infection.

In other words, by the time mammals appeared on earth, ants and wasps were already using an­tibiotics.