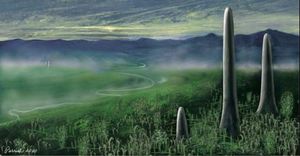 A rendering of Prototaxites as it may have looked during the early Devonian Pe­riod, ~400 million years ago. Credit: Mary Parrish, National Museum of Na­tural History.

A gigantic fossil is making news and revitalizing an old de­bate. Several museums possess specimens of a cylindri­cal organism named Proto­taxi­tes whose tree-like trunks measure up to 8 meters long by 1 meter wide. Prototaxi­tes dated from approximately 420 to 350 million years ago (Silurian-Devonian era) have been collected from five localities. Their identity has been enigmatic.

At the time when they were living, the land plants were still small in size, having only recently emerged from the seas. Terrestial vertebrates did not yet exist. Looking like rockets poised for launch, Prototaxites dominated the landscape, being by far the largest terrestrial life. But what was it? 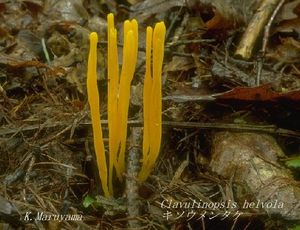 Francis Hueber and colleagues, writing in the journal Geo­logy, have proposed that these organisms were fungi-even though other fungi known from those eras are small and found within the tissues of their plant hosts. The authors' claim is based on several lines of evidence: detailed anatomical studies that show struc­tures best characterized as fungal; pyrolysis-gas chro­matographic analysis that revealed compounds not likely to be of plant origin; the ratio of 13C to 12C which differed from that found in plants from the same locations. They concluded that Prototaxites must have been a hetero­trophic organism that obtained its organic material from others. The authors mention as possible sources of nutrients cryptobiotic soil crusts or bryophy­tes. From all this, a fungus seems most likely. 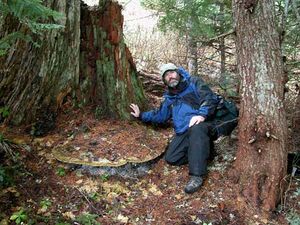 The authors make a challenging statement: "...Protota­xites, if fungal, was more akin to a robust, perennial bracket fungus than an ephemeral mushroom." This raises the question: how big are the largest fungi in today's world? Do any measure up to Prototaxites? The answer is no . There are currently no cylindrical fungi even close to those dimensions. Coral mushrooms are shaped like mini Prototaxites, but they are small in­deed, no larger than 6–8 cm.

The largest known fungus (speaking here of individual fruiting bodies, not their supporting mycelium) is a bracket fungus that grows from dead conifers in Wash­ington and Oregon. This endangered species, Bridgeoporus nobilissimus, can grow as big as 75 cm long by 100 cm wide by 50 cm tall, and can weigh over 100 kg. But it looks nothing like a Protota­xites. Shell-shaped and with a shaggy aspect, it is "reminiscent of a green pizza with a crew cut and is frequently covered with mosses, algae, lichens, and debris." 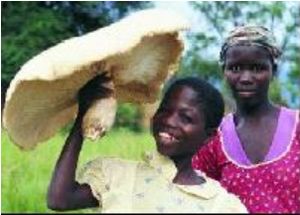 Termitomyces titanicus, from Zambia. Mem­bers of this genus grow on the giant termite nests in Africa and Asia. Source: Nicolò Franzutti.

Not only tough, woody bracket fungi get large in size: giant puffballs reach over 1 meter in diameter, and so can some agarics (mushrooms with stems and caps).

There is nothing currently on our planet that resembles Prototaxites. In fact, the difference in shape and struc­ture between extinct and extant life forms could hardly be greater. No doubt, the issue of Prototaxites identity will be studied further and perhaps a definitive answer will be found.

Is it good to eat? A safe guess is that Prototaxites was quite woody and could hardly be used to garnish a yet-to-evolve steak.