This urgent call, borrowed from movies about submarine warfare, applies to this non-microbial posting that is intended as an appetizer for the fascinating subject of parasite modification of host behavior. Elio promises to follow up on this subject. 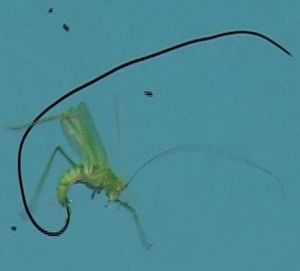 A parasitic hairworm persuades its grass­hopper host to leave its forest home and plunge into water, so the worm can emerge and find a mate. Source

In the most general sense, all living organisms must be able to detect specific, essential aspects of their environ­ment and to react appropriately. Therefore, any compo­nent involved in the detection-decision process (from the uptake/sensory machinery and its output to the regu­la­tion/decision making system) is susceptible to manipula­tion by a parasite for its own advantage.

An interesting non-microbial example is that of the para­sitic Nematomorph worms which brainwash grasshop­pers and crickets to leave their forest habitat and take a fatal plunge into water so that the worms can emerge and mate (Movie).

A proteomic study has shown that during the manipula­tion phase (before the plunge into water), the parasite produces host-mimetic proteins (called Wnt) which act on the host central nervous system to cause the behavior modification (either di­rectly or indirectly through host genome response.) During this same period, a suite of other pro­teins in the head of the host (for example, proteins involved in visual processing, neurogenesis and neurotransmitter activity) also increased in concentration. Remarkably, a high percentage of the worms are also able to escape from the predators (frogs and fish), which ingest their insect hosts before the worms have emerged.

This makes me wonder if it's really me wanting to swim when I go to the beach – or is it some bug living inside me?

Eddy is a physicist doing a postdoc at the Center for Theoretical Biological Physics, University of California, San Diego