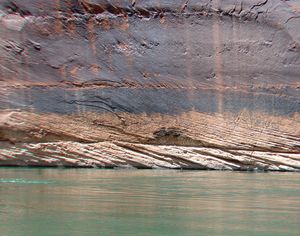 Desert varnish above the high water line of the Colorado River in Glen Canyon. Desert varnish consists of particles of clay along with iron and manganese oxides thought to be formed by the ac­tion of bacteria and fungi. Source: U.S. De­partment of the Interior, U.S. Geolo­gi­cal Survey

Occasionally, we mention a review article that we think should be called to your attention. We initiated this with a stirring piece on bacterial shape by Kevin Young; this was followed by tantalizing observations by Steven Pro­jan on genome size and antibiotic resistance. Now we wish to highlight a review  by J. A. Granick and D. K. New­man called Extracellular Respiration.

The title refers to the procurement of energy from ex­tracellular substrates by microbes.

Energy sources used include not only nearly insoluble minerals such as iron and manganese oxides but also, surprisingly, soluble materials such as DMSO (dimethyl sulfoxide) and humic acids. This article discusses details of the microbiology and biochemistry involved in these processes and also considers the ecological implications of extracellular respiration, for example, the spatial connection between cells and substrate, electron transfer within and between species by electrically conductive nanowires.

So, the old saying that bacteria eat rocks is literally true.