Fungal Alchemy: Using Radiation as a Source of Energy 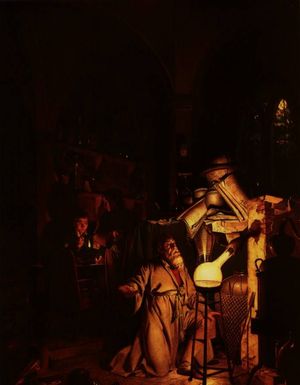 The Alchemist in Search of the Philo­so­pher's Stone, by Joseph Wright of Derby, 1771.

Accustomed as we are to microbial surprises, we were nonetheless taken aback by a report disclosing that certain fungi grow better when exposed to ionizing ra­diation. According to a paper from Albert Einstein Me­dical School, fungi can also use radiation as a source of energy – not exactly one's view of radiation as something malevolent and baneful. Had we paid attention to the news from Chernobyl, we would not have been surprised because the walls of the still hot reactor have become covered with mold. Not only that, but it has been known for some time that fungal species search out radioactive particles, that is, manifest radiotropism.

Many fungi are relatively radioresistant, apparently due to their melanin content. These species are easy to spot because they turn mildewy walls black and form black colonies on agar plates. (These dark fungi even have a term of their own: dematiaceous.) There is, of course, a big difference between being resistant to radiation and actually using it as a source of energy as is proposed in this study. Significant growth enhancement by radiation was seen in Cryptococcus neoformans (which becomes melanized when grown on suitable precursors) and naturally me­lanized species such as Wangiella dermatitidis and Cladosporium sphaerospermum, but not in albino mutants. These results suggest that melanin is the antenna that captures radiation and converts it into usable biological energy. 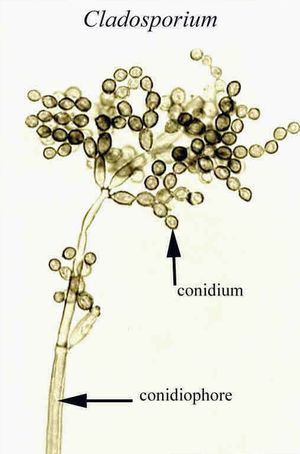 The authors present physicochemical studies showing that melanin is indeed able to capture radiation. As shown by electron spin resonance, radiation alters me­lanin's electron structure. Irradiated melanin reduces NADH four times faster than non-irradiated melanin. Thus, radiation increases its electron-transferring pro­perties. "Just as the pigment chlorophyll converts sunlight into chemical energy that allows green plants to live and grow, our research suggests that melanin can use a dif­ferent portion of the electromagnetic spectrum-ionizing radiation – to benefit the fungi containing it," says Dr. Dadachova, one of the authors of the study.

There is a lot to melanin (or, more properly, to the me­lanins, as they come in quite a few varieties.) They are unique polymers known to protect living organisms against extreme temperature as well as both UV and ionizing radiation. Melanin may well have played an im­portant role in evolution. Many fungal fossils appear to be melanized – a point discussed in some detail in this paper.

A headline in the press release from the Albert Einstein College of Medicine modestly announces that their findings "...could trigger recalculation of Earth's energy balance and help feed astro­nauts."

Great article!
Have you looked at the specific species and performed a gene comparison with our human skin melanin. It appears the certain fungi are found abundantly in Australia where skin cancer rates are skyrocketing. Could there be a connection with these fungi and the internal makeup of the human genome which does include all varieties of organisms via survival of the fittest approaches to genetic mutations for species adaptation over millions of years.

Melanoma behaves just like the walls in the reactor when exposed to radiation treatments and considered radiation resistant. Possible gene makeup may have laid dormant for thousands of years until activated by increased environmental radiation created via ozone hole and or above ground nuclear testing releases into our environment allowing dormant gene activation sequences for survival via host mechanisms and warning systems. Gamma radiation increases may be due to solar activity and or solar system warping as it moves closer to the galactic center magnetic fields.

In either case no appears to really know what cancer is...do they?