Planctomycetes: The Far Out Bugs

I have heard there are troubles of more than one kind.
Some come from ahead and some come from behind.
Dr. Seuss 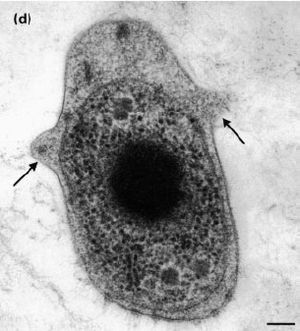 As first year graduate students in microbiology, we are accustomed to microbial surprises, learning again and again how different and exciting bacteria can be. How­ever, it is fair to say that we were not entirely prepared for the Planctomycetes – bacteria that divide by budding, have no peptidoglycan, and possess a unique and per­plexing body plan.

They are not rare, as they are present in many marine and soil environments, including rivers, ponds and hot springs. Nor are they hard to cultivate. Lacking peptido­glycan cell walls, they can be readily selected on media containing antibiotics that inhibit cell wall synthesis.

Replication occurs when a mono-flagellated swarmer cell buds off from a 'stalked' cell. However, unlike other Planctomycetes (and Caulobacter ), P. staleyi  does not make a true stalk. Rather it excretes a holdfast substance that enables it to stick to surfaces. When grown in liquid media, the cells adhere to one another by their holdfast materials forming beautiful rosettes – characteristic forms that enable them to be identified in environmental samples under the microscope. Also characteristic of this species are round protrusions from the sides of the cells which are called pro­sthecae (from prostēkē, Greek for appendage). P. staleyi ­is especially cute, having two pro­sthe­cae that protrude from opposites sides of the polar end giving it the appearance of Mr. Potato Head. The function of the prosthecae is unknown, but since there are only two (and sometimes only one), Butler et al. propose that they may be related to cell attachment or may help slow the cell sedimentation rate in the marine environment. 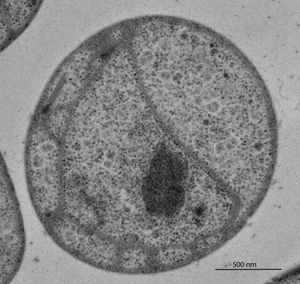 A thin-sectioned cell of Gemmata ob­scu­ri­globus  prepared by a high-pressure freezing method, showing a clear nuclear body compartment bounded by a nu­clear envelope that consists of two membranes. The nuclear envelope is clearly delineated by the ribosome-like particles. Courtesy of Kuo-Chang Lee and John A. Fuerst, Univ. of Queensland.

P. staleyi  is an extremely versatile marine bacterium, due in part to having a genome containing over 7 million base pairs – one of the largest known prokaryotic circular ge­nomes. Strikingly, their ge­nome contains two orders of magnitude more sulfatase genes than found in other known prokaryote genomes. Bacterial sulfatases are ge­nerally used in sulfur scavenging and are regulated in response to sulfur deprivation. It seems odd that P. sta­leyi  would have so many sulfatase genes when its ma­rine home typically has a high inorganic sulfate concen­tration. The researchers suggested that P. staleyi  might use these sulfatases "to access more effectively the carbon skeleton of sulfated compounds as an energy source rather than to meet its sulfate requirements."

P. staleyi  has evolved to be a tough microbe. It encodes an unusually high number of sigma factors ─ 51 to be exact. Its gene regulation provides a tight control over the expression of many genes that are needed only for specific environmental conditions.

It is in their interior morphology that Planctomycetes reveal what is perhaps their greatest pecu­liarity. They appear to have a nuclear membrane! This defies the definition of prokaryotes. As one by one significant exceptions were found to many of the canonical structural distinctions between prokaryotes and eukaryotes, the nuclear membrane had remained as the last bastion – until the Planctomycetes. This finding also leads to speculations about whether their transcription is cou­pled to translation, a prototypical prokaryotic attribute, or whether instead the two processes are spatially separated, as in eukaryotes. 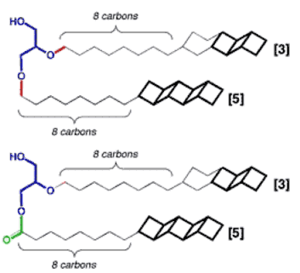 One of the biggest questions about P. staleyi is its po­sition in the evolutionary picture. Although it has no peptidoglycan in its cells wall, it does contain several genes involved in peptidoglycan biosynthesis. This has been interpreted to suggest that the Planctomycetes evolved after peptidoglycan was around and that they subsequently lost some of the genes required for pep­tidoglycan biosynthesis after developing a proteinaceous cell envelope.

Some members of the Planctomycetes carry out the ce­lebrated anammox reaction (anaerobic ammonia oxi­da­tion coupled to nitrate reduction). These organisms have yet another membrane bound compartment, the anam­moxosome, and they also contain unique lipids called ladderanes. To add yet more evolutionary perplexity Gemmata obscuriglobus synthesizes sterols.

How might one explain all the peculiarities of the Planctomycetes? It seems that more studies need to be done to gain a stronger understanding of the role that they play in the grand scheme of evolution. Don't you think that their peculiarities may hold clues to important evolutionary in­sights?

The authors are students in the Spring 2007 graduate course in Integrative Microbiology at the University of California at San Diego/San Diego State University. They want to thank Prof. John A. Fuerst for his generous help with images.