Swimming by the Light of the Sun

Marine bacteria have been much in the news of late, and rightfully so. There are many of them (an estimated 1029 total), they occupy specific local niches in the seas, and they carry out diverse (and sometimes previously unknown) activities. A case in point: some of them harvest energy from the sun via a system other than regular photosynthesis, one based on rhodopsin and retinal instead of chlorophyll. While it has been known since the 1970s that haloarchaea use a similar light-driven mechanism under oxygen-limiting conditions, this was viewed as a novel capability pertaining only to a few extremophiles. Now, it is estimated that 13% of marine bacteria have this capability, and so does a significant fraction of Archaea. Solar power has gone mainstream. 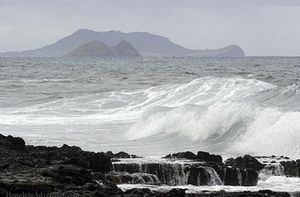 © A. Shimabuku & The Honolulu Ad­verti­ser

These light-harvesting bacteria possess a proteorhodop­sin-retinal system (the PR system). Retinal is a photore­active molecule  that captures light energy for its linked proteorhodopsin molecule. Proteorhodopsin is a trans­membrane protein that functions as a proton pump. Proton pumps establish an electrochemical gradient across the cell membrane. That gradient, in turn, powers the transport of ions across the membrane (a function essential for survival) and, in the case of bacteria with flagella, drives the flagellar motor. The proton gradient can also provide the energy needed to generate ATP.

So much for the background. Walter, Greenfield, Bustamante, and Liphardt demonstrated this capability in a visually observable way. They blocked oxidative phosphorylation and observed the effect of shining light on flagellar movement. When these bacteria are in the dark, the flagellar motors stop. Expose them to green light (the wavelength used by the PR system) and the motors resume. Red light won't do. The brighter the green light, the faster the flagella turn. (Click here to watch a movie: SI Movie 1.)

The energy  required for pumping protons and for generating ATP is conventionally derived from cellular metabolism via oxidative phosphorylation. When this process is not active, as when bac­teria are starved or deprived of oxygen, those with a PR system use it as a back-up energy source. The authors of one study noted that "...light-driven pumping by PR can fully replace respiration as a cellular energy source in some environmental conditions."

A recent report demonstrated that when an operon containing just six genes is introduced into E. coli, the bacterium synthesizes and assembles a fully functional PR system. Evidence is quite strong that some marine bacteria acquired their PR system by lateral gene transfer of this set of genes. Phototrophy, in one fell swoop.