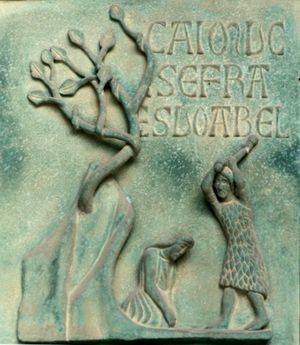 Pneumococci (Streptococcus pneumoniae) aren't the most affable of bacteria. They make antimicrobial agents such as bacteriocins and bacteriolysins that are directed not, as is the usual case, against other species, but against their own. This phenomenon, dubbed fratricide has been linked to the competence status of the bacteria, that is, to the ability of the bacteria to take up extracel­lu­lar DNA. The killers are competent cells, and those that get killed are ones that have not become competent.

In a recent review, Claverys, Martin and Håvarstein dis­cuss several facets of streptococcal fratricide, concluding that it may well be widespread among the streptococci. Do you want a teleological explanation?  The authors speculate that fratricide may be not only a way to in­crease genetic exchange but also a mechanism for re­leasing virulence factors that may enhance the pathogenicity of virulent strains.

Very interesting review. I didn't know about this behavior before, although I have read some of the lit on pneumococcus competence. In my class I always make the point that is was very fortunate that Griffith chose pneumococcus rather than another respiratory pathogen, because natural competence is not that common. This story is now becoming less and less true as people find competence in Vibrio as well (and Bacillus long ago). Makes for a good story, though!

The fratricide issue is very, very interesting. I don't know if people have looked for a fratricidal tendency in other organisms. The competitive bacteriocin and lytic enzyme story was and is very appealing in a nutrient restricted environment. Still, you can certainly come up with good reasons why a fratricidal strategy can confer an advantage. In a nutrient rich environment, it is obvious - the population is about to explode, and you want to have your genes as well represented as possible. I'm not sure I buy the virulence argument (it makes more sense to secrete a virulence factor; hemolysins are readily secreted, if pneumolysin isn't, that raises an interesting question).

A hypothesis I didn't see in the review was that the fratricidal tendency might be part of a transition to a sessile (biofilm) lifestyle. A recent article in Mol. Microbiol (Mol Microbiol. 2006 Sep;61(5):1196-210.) by Oggioni et al suggests coordination of virulence, competence, and biofilm. This suggests the alternative hypothesis that the lytic process is involved in biofilm morphogenesis, rather than genetic advantage (analogous to PCD in eukaryotic tissue modeling).

A great deal to mull over!!!