Pseudomonas aeruginosa is the most versatile of all known pathogens. Few if any bacteria can match its metabolic versatility and the breadth of its host range – from plants to humans. This species is a paradigm of an opportunistic pathogen of humans, being nearly ubiquitous in our habitats but not usually causing disease in healthy people. There is, however, a unique aspect to its taste as a pathogen:  it is something of a specialist. It occupies center stage in infections of people with certain predisposing conditions, for example, cystic fibrosis, burns, abrasions of the cornea, and neutropenia (the decrease in the number of neutrophils.)

While it is a frequent invader of various organs and tissues, it is not on the top of the list of agents that infect severely immunodeficient persons, such as AIDS patients. So what accounts for this organism's idiosyncratic preference for certain conditions? 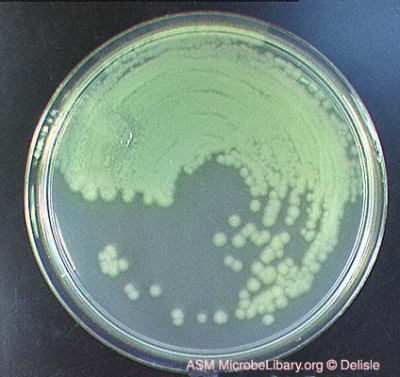 The answer to this question seems quite elusive, but a tantalizing suggestion has been proposed in a recent paper by Zaborina et al. Typically, the predisposing con­ditions for P. aeruginosa infection are associated with stress, and stress, in turn, results in the production of opioids. These authors report that the production of some of P. aeruginosa's virulence factors, ergo its pa­thogenicity, is activated by stress-related endogenous opioids. They investigated the effect of one such com­pound, dynorphin, and showed that it caused a signi­ficant increase in P. aeruginosa's production of its well-known virulence factor, pyocyanin – the compound that gives the species its name and the characteristic green color of its colonies on agar. Not only do endogenous opioids act this way, so do synthetic ones.

The molecular mechanism for the response to opioids involves activation of the bacteria's quorum sensing (QS), a highly-regulated system that needs to be turned on for virulence genes to be ex­pressed in this and other organisms. Key elements of the QS response were shown to respond to both dynorphin and a synthetic opioid. So, stress leads to opioid formation, which activates the organism's quorum sensing, which in turn leads to the making of virulence factors and disease.

In the words of the authors of this paper: "Opportunistic pathogens like P. aeruginosa are equipped with sophisticated surveillance systems that take advantage of a weakened host by intercepting and responding to naturally occurring host chemicals that are normally used as signaling molecules for immune activation and analgesia."

Virulence is the expression of a language shared between host and pathogen, but P. aeruginosa should be careful to use it out of earshot of the narcotics squad.

These stages are characterized, respectively, everywhere by constant cravings and preoccupation with obtaining the substance; using more of the substance than necessary to experience the intoxicating effects; and experiencing tolerance, withdrawal symptoms, and decreased motivation for normal life activities. thanks for the post.