« Fine Literature: Extracellular Respiration | Main | An Update on Mitochondria and Their Invaders » 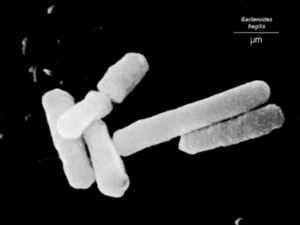 When first used clinically, tetracycline was effective against members of the genus Bacteroides, Gram-nega­tive anaerobes that make up 20-30% of our colonic bac­terial population. Though usually well-behaved, Bacter­oides are opportunistic pathogens capable of causing life-threatening infections if the colon is perforated. Now, virtually all Bacteroides clinical isolates are resistant to tetracycline, and all resistant Bacteroides contain a con­jugative transposon (CTn) that carries the resistance gene.

CTns promote mating and their own transfer from host to host, sometimes to a different species or genus, sometimes even crossing the gram negative/gram positive divide.

CTn-DOT carries a gene for tetracycline resistance and is widespread among Bacteroides species in the human colon. It also carries an operon composed of three regulatory genes. Brief exposure of a Bacteroides containing CTn-DOT to low levels of tetracycline stimulates expression of this re­gulatory operon ~20-fold. This response activates the CTn-DOT excision and transmission genes which leads to a 10,000-fold increase in tranfers. Thus not only does tetracycline select for resist­ant bacteria, it stimulates mating and the transfer of resistance to new hosts. Pretty clever, for a molecule! But that is not all that these regulatory genes do. Ac­cording to a recent report, these genes also affect transcription of host chromosomal genes. In other words, an incoming mobile element (e.g., CTn-DOT) can have "a rather substantial effect on expression of genes in a recipient" cell. CTn-DOT genes upregulate 36 host genes, some increasing 148-fold. Just as many genes were significantly downregulated. The downregulated genes included various identifiable genes, but the re­searchers saw no coherent pattern. Most of the upregulated genes were of unknown function and the effects of their upregulation were not detected. However, one effect was reported: the in­duct­ion of numerous genes of a cryptic CTn which resulted in its mobilization and transfer.

These effects required the regulatory genes and exposure to te­tracycline. The authors pondered why tetracycline is the signal for such a sophisticated regulatory system. They point out that te­tracycline has been used as a clinical antibiotic for only a very short time, certainly by evolutionary standards. Granted, tetracycline has been produced by actinomycetes much longer, but Bacte­roi­des, being obligate anaerobes, are not usually active in the same environments as the aerobic ac­tinomycetes. The researchers favored a more intriguing hypothesis:  tetracycline might be just a stand-in for the real inducer which is some plant phenolic compound that resembles part of the tetracycline molecule. CTns in Bacteroides transfer only when the cells mate on a solid surface. Thus it could be useful to know when your host has made contact with a plant particle in the co­lon. The problem with this hypothesis, they admit, is that they have not yet found such a com­pound.

Sounding a note of concern, the authors observed that discussions of consequences of antibiotic treatment focus on "possible disruptions in the population structure of bacterial microflora and increased selection for resistant strains. Our findings suggest another reason for concern; expo­sure to an antibiotic could trigger changes in gene expression in some intestinal bacteria with as yet unknown consequences."