I have really been enjoying reading this blog over the past few months. Not only is this type of blog of interest to students and microbiological mavens, but the articles and the comments sometimes bring up prokaryotic nuggets not easily found in the literature! Thus, I appreciate the opportunity that Elio and Merry have extended to me, to tell a weird and wonderful microbiological tale.

This tale begins with Elio's Talmudic Question #3: Why are no bacterial pathogens known to use a Bdellovibrio-type of mechanism to penetrate into eukaryotic cells?  Since I have done a little work with predatory prokaryotes, this subject particularly interests me. We are only now starting to un­derstand how Bdellovibrio obtains entry into that enigmatic compartment of Gram-negative cells, the periplasm. Type IV pili have been implicated by a recent publication from Liz Sockett's group in the UK. The periplasm is quite a unique place (see this recommended book by Ehrmann), full of osmotic challenges and diverse solutes, with a gel-like consistency. (At an ASM meeting many years ago, Terry Beveridge of the University of Guelph chided me for saying "periplasmic space" instead of "periplasm" for that very reason.)

Eukaryotic cells do not possess a periplasm, so the simplest way to answer Elio's question may be to state that there is no need for a Bdellovibrio-like mechanism. Instead, pathogens and sym­bionts hijack the mechanisms that eukaryotic cells use to internalize materials from their sur­round­ings: phagocytosis and pinocytosis. So I would turn Elio's question around with a not-quite Talmudic reply: why do prokaryotes not have phagocytosis or pinocytosis? This lead us to a seem­ingly bizarre question: can a bacterium have a "mouth"?

Many bacteria consume long polymers, such as cellulose or chitin. One strategy used by gliding bacteria of the Cytophaga/Flavobacteria group is to attach themselves to these polymers and se­crete enzymes that release monomers or small oligomers. The fragments are then transported into the bacterial cytoplasm and further metabolized. One problem with this approach is that the importable fragments are available to other microbes, not just the organisms doing the "work."  Diffusion works against these polymer-degrading organisms, as well.

Electron micrographs of Sphingomon­as  strain A1 in the absence (left) and pre­sence (right) of alginate. Source

This prompted me to recall a presentation I attended se­veral years ago at ASMCUE by Julian Davies of the Univer­sity of British Columbia. Julian told us about, of all things, a "bacterial mouth." A Gram-negative bacterium, Sphin­go­monas sp. strain A1, does something a bit unexpected. In response to the presence of alginate, it synthesizes an alginate lyase to depolymerize the polymer. But the cell also synthesizes a "pit" on its surface, approximately 0.02 to 0.1μm in diameter. Only one pit is synthesized per cell, and it appears to be lined with ABC-type transporters specific for alginate-derived oligomers and monomers.

Take a moment and look at these electron micrographs. It certainly appears that, as Julian told us, Sphingomonas "opens" something like a "proto-mouth" in response to the alginate! Also, observe the model of the proto-mouth that the researchers postulate. This presents a solution to how a polymer can be broken down in an exclusive fashion: using a pit or proto-mouth linked to polymer degrading enzymes and an ABC transport system.  The pit appears to concentrate the released oligomers, further reducing loss by diffusion.

Putative model of the pit formed by Sphin­gomonas sp. when dining on algi­na­te. Source

If bacteria can have a "mouth," do they then "swallow"? Prokaryotes, it appears, don't have much of a vacuolar system. However, this discussion of a pit and proto-mouth leads to the possibility of evolution toward something like phagocytosis and pinocytosis (and might also help explain the genesis of "prokaryotes within prokaryotes"). There already is some evidence for this kind of internal structure in a less E. coli-centric world. Some planctomycetes do appear to have vacuole-like compartments which may be more "eukaryote-like" than gas vacuoles, magnetosomes, or carboxysomes.

So where are we, regarding the questions in this essay? It does look like some bacteria have a pit-like structure that could be called a primitive mouth. We may yet find processes that resemble phagocytosis among the prokaryotes. We should start looking, perhaps, among the cell wall-less bacteria and Archaea, which could conceivably form vacuoles by "engulfing" particles from the environment, much as eukaryotic amoebae do. Also keep in mind that the giant bacterium Epu­lopiscium, found in the gut of surgeonfish, has many, many invaginations of its cell membrane. Close off such an invagination, and a nutrient-rich vacuole could be created.

Stay tuned, and keep looking. In a nutrient rich gut, or a hot spring, or within a complex biofilm, I believe that some uniquely weird and wonderful prokaryotes are waiting to be discovered. Per­haps even ones with a "mouth" and "teeth"! 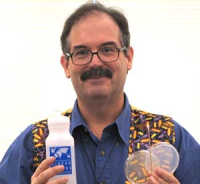 Mark O. Martin is an Associate Professor of Biology at the Uni­versity of Puget Sound in Tacoma, Washington. He remains an unrepentant microbial supremacist.