« Plants and Animals Converse with Microbes in the Same Language | Main | Microbial Endocrinology: A Coming of Age » 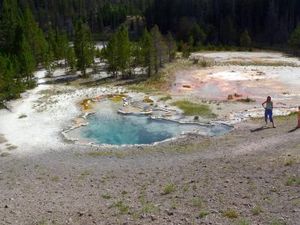 Amaya Garcia, a member of the research team, next to Octopus Spring. Photo­graph by David Strong. Source: Penn State Dept. of Public Information.

A recent article in Science describes the identification of a novel photosynthetic bacterium in springs in Yellowstone Park. Its presence within the phototrophic microbial mats was detected by metagenomic analysis. This bacterium doesn't belong to any of the five phyla previously known to have chlorophyll-driven photosynthetic ability (Cyano­bacteria, Chlorobi, Proteobacteria, Chloroflexi, and Firmi­cutes) but belongs to the Acidobacteria.

Adding a new and interesting phylum sounds important all right, but still we wondered about the deeper meaning of the finding. Not being experts in this area, we asked soil microbiologist David Lipson. His reply:

Acidobacteria make up at least half of the sequences found in most soils, very few have been cultured, and those that have so far were all organotrophs. This shows that they are possibly as physiologically diverse as they are genetically diverse!