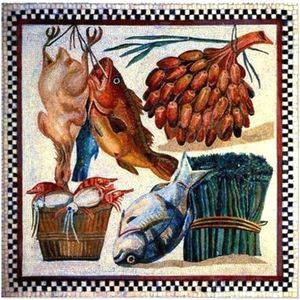 One of our favorite microbiological blogs, Twistedbacte­ria, is devoted to the actinomycetes. A July 12 post called Rome, Dried Figs, and Streptomycetes highlights an ar­ticle purporting that dried figs from Herculaneum were a health food for the inhabitants – a source of antibiotics.

Herculaneum was one of the towns devastated in the first century AD by an eruption of Mount Vesuvius and abundant artifacts and human remains have been pre­served there. The figs carry under their skin a dense net of branching filaments, possibly of antibiotic-producing Streptomyces. Also, bones from people killed by ash from the eruption reveal autofluorescence possibly due to tetracycline, a Streptomyces product. Although blog­master Cesar Sanchez points to the need for further evi­dence, he finds this mixture of archaeology and microbiology fascinating, and so do we. 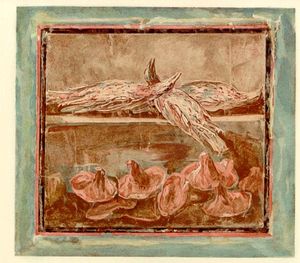 This Herculaneum fresco (to the right) is probably the earliest credible representation of mushrooms in the Western world. They are most likely Lactarius deliciosus, a species much prized in the Mediterranean today.