From Free-Living Bacterium to Cellular Citizen

But in the end I hope you only turn out better than me
I hope you know I love you young'n, like Father, like Son 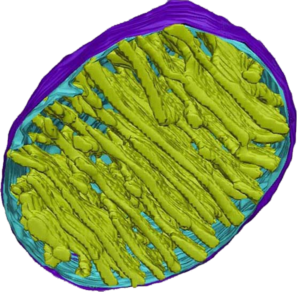 Given the heritage of cell organelles, microbiologists may well be entitled to a familial concern for how their "bacte­ria" are faring now. Witness a lapel button we saw at an ASM meeting that said "Free the Organelles." (Click here for how to get one.) Mitochondria, chloroplasts, and oth­ers have drifted considerably away from their ancestors, and therein lie some great tales.

Read, if you need convincing, a joyously celebratory re­view of reviews by Gottfried Schatz that highlights the essence of mitochondricity. Forgive us, but this leads us to a couple of digressions. Schatz says that "....on a weight basis (a mitochondrion), converts between 10,000 and 50,000 times more energy per second than the sun." Our second digression is pure chauvin­ism. Schatz tells us that it was a microbiologist, Richard Altman, who in 1890 coined the name "mi­tochondria" and that it took another microbiologist, Peter Mitchell, to figure out how the energy of respiration is coupled to ATP synthesis.

Going back to the theme, organelles differ from their bacterial forerunners in many intriguing ways. For one, it turns out that the mitochondria of "higher" eukaryotes (and some "lower" eukar­yotes such as yeast) are unruly entities that lack a discrete corporeal identity – the sine qua non of bacteria and all other cells. It has been known for some time that mitochondria fuse with their neighbors and later divide and wander all over the cell. Think of them as making up a dynamic network, a relaxed kind of structural arrangement that requires some adjustment of the microbio­logical mindset. 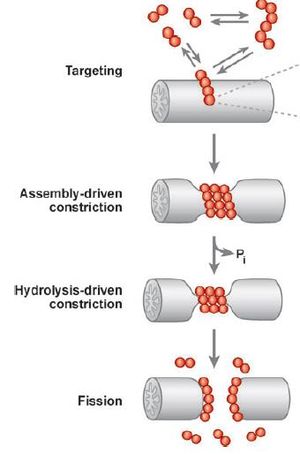 A model of the mechanism of mito­chon­drial division. See legend to Fig. 1 for de­tails. Source.

We might expect, then, the process of division to differ between organelles and bacteria, although neither use a "conventional" mitotic apparatus (a topic discussed previously in this blog.) When organelles divide, do they use the same proteins that participate in bacterial cell division? Yes and no. Both mitochondrial and chloroplast division involve dynamins, a family of quite exciting proteins. Dynamins are mechanochemical GTPases that participate in endocytosis and other forms of vesicle trafficking. In brief, once modified by GTP, dynamins make long spirals that tighten around the site of division until the organelle is cut in half or, if this were a vesicle, it is excised. (If this sounds like a snake constricting its prey, forget it. You know that snakes squeeze only to prevent their victim from  inhaling.) Dynamins are tar­geted to their site of action by other proteins (See this review for more details.), in much the same way as for FtsZ, the tubulin protein required for cell division in all but a few bacteria.

Have dynamins replaced FtsZ in the organelles? Again the answer is both yes and no. The mitochondria of "higher" cells appear not to have FtsZ. However, FtsZ has been found in the mitochondria of quite a few protists. FtsZ is widely found in chloro­plasts and in some cases has been shown to be essential for their division. Some chloroplasts even retain other cyanobacterial division genes such as the MinD and MinE proteins dear to the hearts of students of bacterial cell division. Here's another twist. Arabidopsis chloroplasts have two FtsZ proteins, one of which appears to act on the inner membrane, pulling it inward as does FtsZ in bacterial division. The other one acts on the outer membrane, squeezing from the outside, as does dynamin in mitochondria. In some instances, FtsZ is known to be encoded by the nucleus – a nice example of lateral gene transfer from the ancient endosymbiont to the nucleus. 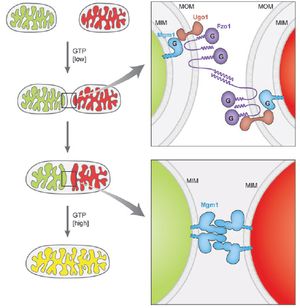 A model of the mechanism of mitochon­drial fusion. See legend to Fig. 2 for de­tails. Source.

Mitochondrial fusion is another matter, a skill acquired independent of bacterial ancestry. There are few exam­ples of bacteria fusing, except through laboratory ma­nipulations. Dynamins are involved in fusion, too – dif­ferent kinds than the ones that participate in division. The process of fusion is doubly intricate because the outer and inner mitochondrial membranes fuse sepa­rately, using different proteins. One protein in the outer membrane, called Fzo1 in yeast, tethers to its opposite number on the other mitochondrion via their helical regions. (See this review.) After the outer membranes join, the inner membranes carry out a separate fusion process, this time via tethering by Mgm1 proteins.

Yet another question suggests itself. Some unicellular organisms have a single mitochondrion or chloroplast. Doesn't this simple fact imply some degree of stringency in organelle division in those organisms? We will discuss this in another posting in the near future.

This balance between fusion and fission is a matter of great importance to the host cells. Muta­tions in fusion proteins affect apoptosis and, in humans, cause neurodegenerative diseases. But it's even bigger than that. To quote from Schatz's review: "Today almost every disease seems to have some mitochondrial angle, be it diabetes, deafness, blindness, muscular dystrophy, cancer, premature aging, dementia, male infertility, or even some bacterial infections."

Free the organelles? Sorry. It's too late.