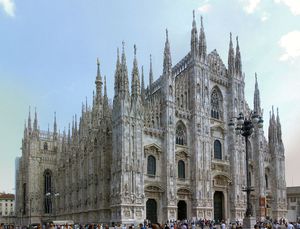 Complete view of the façade of Milan cathedral.

Grime on old buildings is a microbiological concern — not because microbes cause it, but because they can help get rid of it. The gray pall shrouding old buildings comes from the conversion of chalky stone such as marble (calcium carbonate) to gypsum (calcium sulfate), a result of atmospheric pollution. Not only is gypsum more soluble (which facilitates deterioration), but smog and mineral particles stick to it, which gives venerable old buildings a mournful cast. The conventional way to clean such facades is to douse them with an ammonium carbonate-EDTA-surfactant mixture. Now there is a better way.

A group of researchers from several Italian institutions have devised a biological cleaning method that employs sulfur reducing bacteria to convert the gypsum back into calcium carbonate. Desulfovibrio desulfuricans is adept at that, and these researchers cleverly devised procedures for its delivery to the affected areas. Using an autotrophic organism has advantages too, in that you don't have to feed it with an abundance of organic nutrients. By several biological, chemical, and visual criteria, this biological treatment method is clearly superior to the chemical one. The bacteria are careful workers, removing the gypsum but leaving a warm patina, and making the surface stronger than when they arrived. However, we must be mindful that this report deals with small scale laboratory experiments. Tackling a whole building may require considerable engineering development. 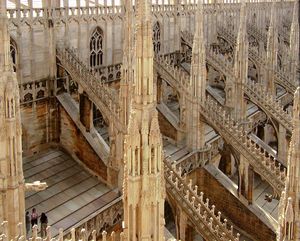 View of the left side of the Milan cathedral, taken from the stairs to the roof.

I want to bring up a personal reason for mentioning this work. I was born in Milan and lived there until almost teen age. Since we lived only a short walking distance away, I often went to the Piazza del Duomo, the Cathedral Square. I got to admire the cathedral and its hundreds of spires. As the family story goes, when I was a toddler my nanny took me into the cathedral, most likely to pray. When we got home, my Teddy Bear was missing. It turned out that I had left it in a confessional where I'm sure that it got freed of all its sins.