Sex (Well, Not Really) and the Single Organelle 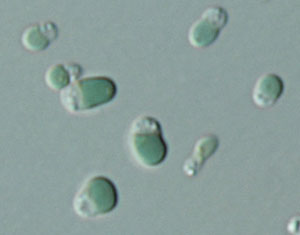 We recently posted a piece on organellar division and – for some mitochondria – fusion. We emphasized that in the cells of many organisms (which contain more than single organelles) the mitochondria lack permanent iden­tity. Rather, mitochondria fuse with one another and later divide. During division, they get pinched off by the action of special "strangling proteins," the dynamins. Having a large copy number, there may be no need for a special mechanism to ensure precise segregation during cell division. But how about organisms that have but a single mitochondrion or chloroplast?

Doesn't this simple fact imply some degree of stringency in their organelle division? Note that this is a trick question. Because for mitochondria that fuse and break up, the number of these organ­elles is indeterminate. However, in some unicellular organisms one can reasonably say that the number is indeed one of a given type of organelle per cell. The evidence rests not only on mor­pho­logy but also on the coherence between cell division and organelle division. 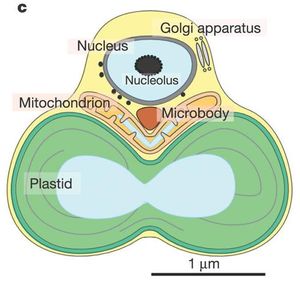 Cyanidioschyzon merolae cells contain a nucleus, a V-sha­ped mitochondrion, a dumb-bell-shaped plastid, a microbody and a Golgi apparatus, divisions of which can be highly synchronized by light/dark cycles. Source.

A favorite organism for such studies is a small red alga, Cyanidioschyzon merolae (you might as well get used to its name because you'll surely hear more about it in the future). C. merolae has a single mitochondrion and a single chloroplast, both of which divide once during each cell cycle, but not necessarily both at the same time. Be­fore going into that, we should introduce the organism. C. merolae is a red alga which measures a mere 2 μm and lacks a rigid cell wall. It lives in acidic hot springs: pH below 2, temperature of 45° C. Conveniently, division of the cell, the chloroplast, and the mitochondrion can be synchronized by light/dark cycles. Its nuclear and or­ganellar ge­nomes have been sequenced, revealing se­veral unique features. For example, it has only three copies of ribosomal genes, almost no introns, no myosin genes, and two dynamin genes that are used only for division of mitochondria and plastids. At approximately 16 Mbp, its nuclear genome is among the smallest known for non-symbiotic eukaryotes and cur­rently ranks as the smallest of all photosynthetic eukaryotes. Put this all together and you have a handy model organism.

So, how do the organelles divide in C. merolae ? Note that in most eukaryotes, organelles are moved around by cytoskeletal elements, microtubules and/or microfilaments. But C. merolae lacks a conventional cytoskeleton, as indicated by the absence of actomyosin, myosin genes, and undetectable expression of actin genes. It does, however, have microtubules and typical α-tubulin, as well as dynamins (GTPases involved in membrane trafficking). It makes do with what it has, and uses these components to connect organelle division with mitosis. The dividing mitochondrion is directly associated with the mitotic spindle, suggesting that its division is physically coupled with mitosis and may, indeed, be required before spindle elongation can proceed. The daughter mi­tochondria are associated with the spindle pole bodies and thus are segregated to the opposite ends of the cell. (Since this association also occurs in yeasts, the authors suggest that this mecha­nism may be widespread among eukaryotes.) As the daughter mitochondria are severed, dynamin sticks to each of the mitochondria and to the tip of a microtubule stretching between them.

Some interesting bits about the division machinery. Division of both mitochondria and chloro­plasts involves both FtsZ (a homolog of the bacterial division protein, now encoded in the nuclear genome) and dynamin (a eukaryote-specific protein). The isolated chloroplast division machinery includes supertwisted rings and spirals, suggesting that these components actively contract during organelle division. Indeed, the spirals can actively constrict after being stretched using optical tweezers.

More reading is required to appreciate fully all the details. Still, you get the idea that in this eu­karyote, with the smallest of all phototrophic genomes, organelle division is a reliable and well-regulated process coordinating components of bacterial as well as eukaryotic origin. When you have no duplicate copies of your single organelles, there is no room for error.