A Masterpiece of Bacterial Structure 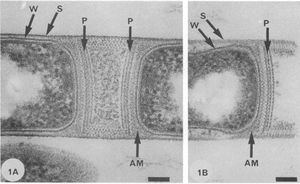 Terry Beveridge of Guelph University died recently. We re­gret the loss of this outstanding structural microbiolo­gist who made stellar contributions to varied topics such as the structure of the S-layer, the interaction of micro­bial surfaces with metals and antibiotics, bacterial cell division, Gram stain and its variability, and many more. He was a very fine person, befitting his early training with Bob Murray, a great friend of this blog. I am prompted to honor Terry's memory by recounting an important piece of work he published in 1991. It still has much currency.

Terry and his colleagues were studying an archaeon, Methanospirillum hungatei. (The species name honors another one of my heroes, Bob Hungate, whom I will speak about at another time.) M. hungatei is sheathed and forms chains some 9–12 cells long. What makes them unusual is that they have proteinaceous plugs at the ends of each cell. Furthermore, the plugs at the ends of each filament stain Gram-positive, the rest of the filament Gram-negative. So, is M. hungatei Gram-positive or Gram-negative? The answer is both, as was pointed out recently in a comment to this blog by SMC.

Elegantly, Beveridge's lab studied this phenomenon by replacing Gram's iodine with an electron-dense platinum compound and then viewing the cells using high resolution electron microscopy. They found that the plugs, which could be isolated from the sheaths for study, consist of three layers with highly-ordered molecular arrays. All three layers contain holes, and one of them (the "holey layer") has significantly larger holes. They proposed that these holes, which make the plugs 3–6 times more porous than the sheath, allow passage of compounds of higher molecular weight – thus the selective Gram-positive staining of the filament ends. Once through the terminal plug, such compounds can diffuse along the filament axis to the rest of the cells, passing through the interior plugs along the way. This arrangement may reflect the need for caution on the part of the cell regarding what it lets in. By limiting the entry for large and possibly toxic compounds to the ends of filaments, the interior cells may have a better chance to either escape or counter their toxicity.

This paper is full of lovely high resolution micrographs and computerized reconstructions which showcase the natural symmetry and pattern of these unusual structures. And we were so naïve as to suggest (in our Talmudic Question # 21) that Archaea tend to be less structurally sophisticated!