Who wouldn't agree how enormously gratifying it would be to make ecological sense of every lab finding, to see how the phenomenon being observed fits with the organism's life outside the lab. Sounds easy? Fat chance. Most of the time, we can only make guesses, and there are occasions when even a good guess eludes us. Here is a recent example. Brucella abortus, the agent of bru­cellosis in livestock and humans, has a light sensor, and the expression of some of its genes are controlled by light. Not being a phototroph and not living most of the time in a lit environment, this alone may be a surprise. But there is more to this. 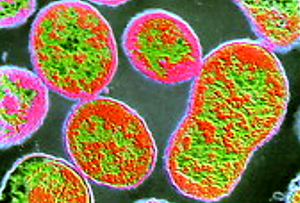 The light sensor consists of a module in a histidine ki­nase, called LOV for light, oxygen, or voltage. The LOV protein domain contains approximately 110 amino acids and is associated with a light-sensitive flavin cofactor. That is not news because some 100 bacterial species are known to have LOV, and so do certain archaea, fungi, plants, and animals. What is news, however is that B. abortus responds to blue visible light in a most unex­pected way: it increases its virulence. When grown in the light, B. abortus is ten times more virulent in a macro­phage system than when grown in the dark or when its LOV function is eliminated through mutation.

How does light activate the virulence genes involved? Absorption of light by the bound flavin in­duces a conformational change in the LOV-histidine kinase protein, which, it is presumed, leads to alterations in the expression of virulence genes. B. abortus shares its LOV-kinase arrangement with another brucella, B. melitensis, with the plant pathogen Pseudomonas putida, and with a marine bacterium, Erythrobacter litoralis. 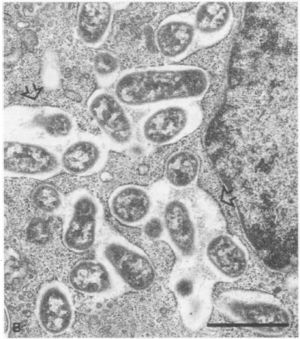 Massive proliferation of Brucella in a bo­vi­ne macrophage. Source: Texas A & M University.

What's the connection in the real world between light and Brucella virulence? This is a conundrum because these or­ganisms are usually transmitted through milk and direct contact. Try as you may, it's not easy to make the case for more than sporadic contact of these or­gan­isms with light. Is light sensitivity an atavistic remnant of an ancestor with a different ecology? Is light a synonym for another natural stimulus? Is this mere happenstance? Most microbial environments are not exposed to sun­light, and most microbes lead a light-sheltered existence. The exceptional illuminated habitats are the aquatic en­vironments of photosynthetic bacteria, the surface of plant leaves (the phyllosphere), crusts of soils, and some others.

Several publications have had a field day with this story, snaring their readers with headlines such as "Bacteria See the Light." Science magazine commentators predict that microbiologists will start incubating their cultures under both light and dark conditions, which may well lead to an explosion of interesting data. We share this excitement and the sense of surprise. But let's own up to it, the function of light-sensing in these microbes does seem like a mystery.

It would be unfair to leave it at that. There is one B. abortus story that may quench our ecologi­cal/physiological craving. This organism has a special predilection for erythritol, a sugar found in the placentas of some mammals – specifically in those in which B. abortus causes abortion (e.g., cattle), but not in those where it doesn't (e.g., humans). There is probably more to this story, but it seems less inscrutable than the effect of light.