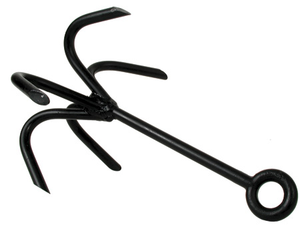 Grappling hook with 2 more barbs than a hamus.

We confess to having missed a report of one of the mi­crobial world's most unusual structures. These are pili-like filaments located on an archaeon that look for all the world like strands of barbed wire with a three-pronged grappling hook at the end. The article appeared in 2005 and has not had any follow-up that we could find. On the assumption that others may also have missed it, we share this bit of exciting old news.

The organism first. Called SM1, this is a previously undescribed archaeon found in a sulfurous marsh in Bavaria, growing at about 10°C. It cannot yet be cul­tivated in the laboratory, but it can be retrieved by placing polyethylene nets in the water and waiting about a week. The organism has been found only in close association with a filamentous sulfur-oxidizing gamma-proteobacterium, Thiothrix. Together, they form characteristic, easily identifiable, macroscopic string-of-pearls structures. The SM1 cocci make up the inner portion of each pearl. Each SM1 cell has about 100 pili-like fibers distributed all over its surface. Each fiber consist of a long filament decorated by strands that give it the appearance of barbed wire, termi­nating in a structure that looks like a Ninja grappling hook. The authors call this structure a hamus (pl. hami), which is Latin for prickle, claw, hook, barb, or fishing rod. 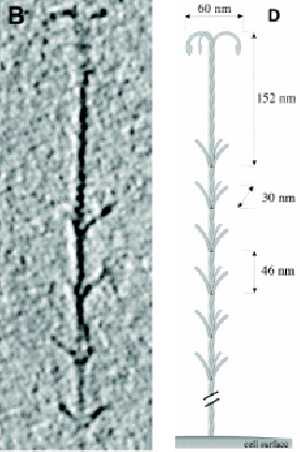 Cryo-electron tomography of a hamus (B) and a model of the hamus with dimen­sions (D). Source.

Using cryo-electron tomography, the authors present structural details of this complex structure. They also purified the hami and showed that they consist of one major protein-a very tough, 120 kD protein, but small amounts of other components might be present. How are these structures with their characteristic base-to-tip architecture assembled? Since they found no evidence of a central channel, the authors suggest that new subunits are added at the base, but they can not imagine how the prickles and the hooks are attached.

Justifiably, the authors suggest that hami are adhesive structures for attachment or anchoring of the organism. In experiments, the SM1 were seen to adhere strongly to all surfaces tested and to each other.

You will read in this article that: "It appears that one of the most basic forms of the microbial world long ago developed a tool that mankind now uses in technology worldwide, a parallel of direct interest to the fields of bionics and biomimetrics." What's next?