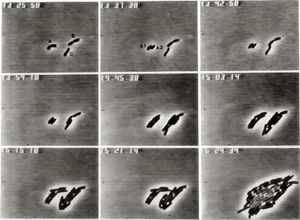 The question arises: do bacteria get old? Of course they do, their being young immediately after cell division and old when they are about to divide again. But, in a differ­ent sense, do they age over many generations? Or, as is commonly assumed, does binary fission obliterate any difference between sibling cells? The question has been studied in detail by Eric Stewart and colleagues, with the surprising answer that conventional wisdom is wrong. There is a difference between the growth rates of  "old" and "new" bacteria. Subtle, but there. This question, and a related one regarding the percentage of viable cells in a growing culture, has been discussed in a highly satisfying manner in a series of posts on John Dennehy's illumi­nat­ing blog, Evilutionary Biologist. I had a small hand in it, as this repartee reminded me of an unassuming and unpublished experiment I did one hundred years ago (or so it seems).