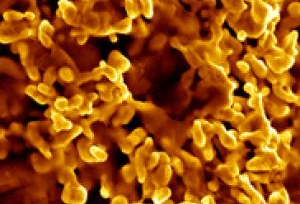 Scanning electron image of bacterioform gold on a gold grain from the Hit or Miss Mine in northern Queensland. Courtesy of CSIRO Australia.

Copper, uranium, gold, and other metals are mined by bacteria and archaea, and this takes place on an indus­trial scale. (For two reviews, click here and here.) Con­sortia of these organisms leach minerals from ores – even low-grade ores – and thus have commercial bles­sing. This is an old story. Rio Tinto, a river in Southern Spain, has been known since pre-Roman times to be the site of bacterial mineral mining. Newer is the realization that bacteria also do the opposite of leaching, namely they can mineralize various minerals including gold.

In two distant mines in Australia (one with the appro­pri­ate name of Hit or Miss), soil overlying the mineralized zones contains an unexpected amount of gold grains and nuggets. Below, the gold is sequestered in non-granular form in quartz. In order to be transported to the surface, it must be solubilized and then remineralized. It is thought that bacteria and archaea carry out both steps. A recent Australian study probes the remineralization process in some detail. Nuggets collected from the surface, ranging in size from 0.1 to 2.5 mm, were found to be covered with a biofilm consisting of perhaps as many as 30 different bacterial species. The dominant organism found on all the golden grains but not in the surrounding soil was a close relative of Ralstonia metallidurans. This beta-proteobacterium is known to be highly resistant to heavy metals and to be able to reductively precipitate silver, cadmium, and zinc. 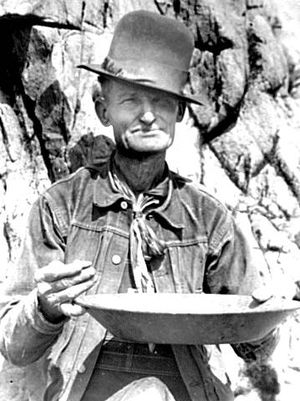 The researchers determined that in the laboratory R. me­tallidurans can also reductively precipitate highly toxic gold chloride, although 90% of the cells die initially. The precipitated gold is deposited in distinct patches within some of the cells and distributed all over the surface of others. Since gold is toxic to most organisms, Ralstonia may have little competition while it detoxifies its local en­vironment.

While some may want to use this organism as an indi­ca­tor of gold, microbiologists might use gold as an indicator of Ralstonia. Is Ralstonia the fulfillment of an alchemist's dream, the embodiment of the philosopher's stone? Well, not quite, because Ralstonia doesn't turn base metals into gold, which is what that elusive magical stone can do. But it comes close.