We thank Bruce Levin for calling this to our attention. 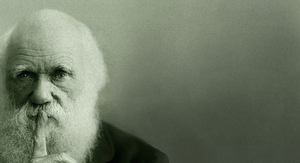 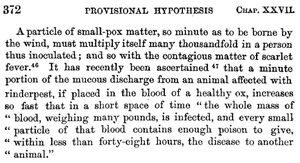 This isn't the only place where Darwin and microbes intersect – in the following passage from the "Voyage of the Beagle", Darwin speculates that the red color he observed is from "some infusorial animalcula" – 1830s-speak for microbes – and we now know that halophilic Archaea are in fact responsible for the reddish color of many salt lakes.

"The border of this lake is formed of mud: and in this numerous large crystals of gypsum, some of which are three inches long, lie embedded; whilst on the surface others of sulphate of soda lie scattered about. The Gauchos call the former the "Padre del sal," and the latter the "Madre;" they state that these progenitive salts always occur on the borders of the salinas, when the water begins to evaporate. The mud is black, and has a fetid odour. I could not at first imagine the cause of this, but I afterwards perceived that the froth which the wind drifted on shore was coloured green, as if by confervæ; I attempted to carry home some of this green matter, but from an accident failed. Parts of the lake seen from a short distance appeared of a reddish colour, and this perhaps was owing to some infusorial animalcula."

Thanks for pointing out Darwin's passage on “Infusorial animalcules.” He gets better with age, don't you think?