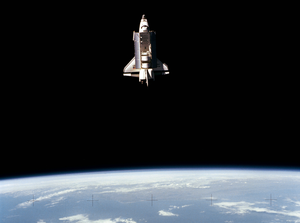 Earth-orbiting space shuttle Challenger be­­yond the horizon, captured by a 70 mm camera onboard the unmanned SPAS-01 Satellite during flight day 5 of the STS-7 mission. Source

It would take a brave person to question a paper signed by 41 authors, especially when they performed an amaz­ing experiment on gene activation in space. In fact, given the difficulties of carrying out such an experiment, any criticism would be downright churlish. Nevertheless...

A recent report shows that Salmonella enterica var. Ty­phimurium growing on board the Space Shuttle changes the expression of some 160 genes, with the RNA-binding protein Hfq in command. Back on Earth, the bacteria that went on this ride were more virulent in a mouse model and made more extracellular matrix. Besides the intrinsic interest, this finding may eventually help avoid infectious hazards for astronauts.

So, what's the issue? The authors compared the space-grown cultures with those grown under "identical conditions" on the ground. The quotation marks indicate our audacious attempt to ask the question: "how can one carry out controls for a space experiment?" The authors cannot be faulted for not trying, but one wonders if all the steps and manipulations can be faithfully copied. Perhaps some day they may be able to carry out a control experiment in space at normal gravity. We bet they thought of that.