Poor wand'ring one!
Though thou hast surely strayed...
Pirates of Penzance by Gilbert and Sullivan

Mycoplasma have good press agents. They frequently make the news these days, often because they have the smallest genomes of any free-living organism and, mirabile dictu, because their genome has been transplanted into a willing "anucleate" recipient, creating the first "synthetic cell." You might think that small means simple, but not so. Qualities of these organisms surpass their elephantine brethren in both complexity and fascination. Here is but one example of my­coplasmal ascendancy... 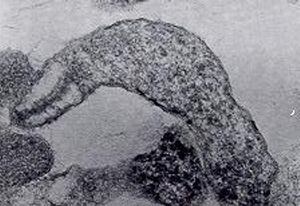 Some mycoplasmas, such as M. pneumoniae, move by gliding, using a mechanism that may well be unique to this group of organisms. At the leading end of the cell, they have a complex structure termed the terminal or­ganelle that is involved not only in motility, but also in cell adherence and even cell division.

The authors of a recent report, B. M. Hasselbring and D. C. Krause, made mutants that have a weak connection between the terminal organelle and the parent cell. This allows the terminal organelle to break off. As you might expect, the cell is rendered immobile, but remarkably the detached organelle goes its own way and continues to move for about a half hour! This demonstrates convincingly that the organelle is indeed respon­sible for motility, acting, in the words of commentator Grant Jensen, like a dog pulling a sled.

Normally, when a gliding cell encounters another cell, it is slowed a bit by the cell-to-cell contact but continues moving forward. Not so with these mutants. When a mutant glider is slowed by contact with another cell, the terminal organelle keeps on going at full speed, stretching the cell body into a thin thread which finally snaps, liberating the organelle.

A few more details. No DNA was found in the roving structures, but three proteins known to be localized in the terminal organelle were. A protein that is localized at the base of the organelle, P41, was found to have been altered in these mutants. Being able to isolate the organelle should facilitate study of its component parts and lead, eventually, to understanding how it works.

There is more here to hold our attention. When deprived of its terminal organelle, the immobi­lized cell makes one anew at the pole – except for P41 mutants who make them laterally, that is., in the wrong location. So, even organelle localization can be studied in this system. In his com­mentary, Jensen gives five other reasons why this story is deserving of attention.

In my youth, Mycoplasma were considered an oddball curiosity. If one could, one might as well set them aside. Even their name was wrong: myco? Their claims to fame were that they lacked a cell wall, some of them contained sterols, they contaminated tissue cultures (because they passed through filters used to sterilize the media), and they caused strange diseases, such as "aty­pical" pneumonia (what could be more pejorative than to be dismissed as the agent of something aty­pical?). Times have changed. They are now at the forefront of synthetic biology, genomics, and, soon, nanoengineering.