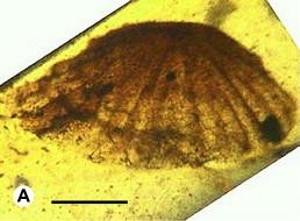 Sometimes the title says it all. Evidence of mycoparasitism and hypermycoparasitism in Early Cretaceous amber tells you: (a) that the authors are talking about something that took place some 100 million years ago, and (b) that there are several layers of parasitism in the specimen in question. So, what is this specimen in question? It turns out to be a mushroom encased in amber, currently the oldest known fossil mushroom (having bested the previous record holder, another mushroom preserved in amber).

The authors could not identify the mushroom without getting into the specimen (find out below why they didn't), but it clearly resembles present day species (perhaps in the genus Mycena, Marasmius, or Collybia  — mushrooms that are well known even to amateur mycologists). Pretty much all there is to this specimen is the cap, which is only 2.2 mm across. However, it is distinctly parasitized inside and out by a mycelium made up of the hyphae of some other fungus. This, in turn, is clearly parasitized by yet another fungus that invaded its tissue. The three fungi are readily distinguishable by morphological features of their hyphae.

Infection of fungi by other fungi (mycoparasitism) is widespread today, and may even have its uses for controlling unwanted fungal invaders of our crop plants. However, this seems to be the first known instance of triple-layered parasitism in the fungi. If it happened 100 million years ago, why not today? 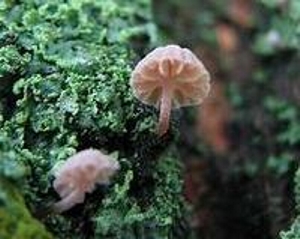 It isn’t hard to imagine how this mushroom became encased in amber. At present, there are some tiny mushrooms that grow on the bark of trees. An example is the diminutive Mycena corticola which used to appear after every good rain on the bark of an English elm in my yard in Newton, Massachusetts. If a blob of resin were to fall on such a mushroom growing on conifers, the result may well be a specimen like the one we are talking about here.

Why not cut up the specimen for further study? One reason is that it was offered, intact, for auction on eBay. Asking price? $100K. No bids.