Beauty can be complex: 'Improvisation 31' by Wassily Kandinsky (1913). Source

Few topics of recent have been as titillating as communi­cation among bacteria. Just like insects, bacteria "talk" to each other in a chemical language, asking one another questions such as: How many of us are there? Is it time to make a biofilm? Do conditions call for making toxins? and (the grandfather of them all) Should we turn on the light? Most of the time, the conversation doesn't get started until the population density has reached a thresh­old level – why debate the issue if you don't have a quorum? Thus, "quorum sensing" is the apt term used for this linguistic skill.

Typically, the messages communicated impact the individual first, and only later the group. Ultimately, a species may well gain from, say, the timely making of a biofilm, but each cell that plays this game may get an immediate reward. There are instances when the mes­sage is less benign. E. coli cells, it turns out, some­times also tell each other when it's time for some of them to commit suicide. One interpretation is that this happens in times of nutritional or other stresses; the dying bacteria lyse, releasing nutrients that can benefit their compatriots.

Much is known about one mechanism that leads to this behavior, termed bacterial programmed cell death. Two E. coli proteins, MazE and MazF, are involved. MazF is a stable toxin, MazE a labile antidote. Stop protein synthesis in any of a number of ways and the MazE level will drop, giving the stable MazF free rein to kill the cell. When the genes for the toxin and antidote are encoded on a plasmid, the arrangement is known as an addiction module. Lose your plasmid, and you're dead. It has been discussed that toxin-antitoxin systems may have several hypothetical functions. 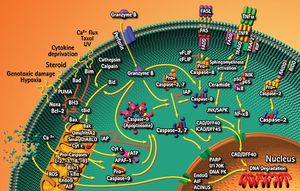 (Click to enlarge)
The apoptosis pathway. In eukaryotes, pro­grammed cell death is quite intricate. Will it turn out to be simpler in bacteria? Credit: Merck

For some time, it has been known that a soluble extra­cellular factor is involved and that it is made in response to quorum sensing. The exciting recent news is that this factor has been identified as the somewhat unusual linear pentapeptide, NNWNN (asparagine – asparagine – tryptophan – asparagine – asparagine). Identification of the compound was no small task. It required defying the experts by modifying the standard mass spectrometry protocol to eliminate the acid pH to which this peptide is sensitive. Given the right conditions, the NNWNN peptide is a potent killer in nanogram amounts. Its action is re­lated to the MazE/MazF story since deletions in those genes render the cells insensitive to the peptide. The mechanism of the peptide's action awaits elucidation.

Meanwhile, there is more excitement: the source of the NNWNN peptide appears not to be a de­­dicated synthetic system, but rather it is clipped from the enzyme glucose-6-phosphate dehydro­genase. What might such a metabolic enzyme have to do with these higher order phenomena? As noted in a Perspective in Science:

...it seems reasonable that it [the peptide] is made when the bacterium, for reasons unknown, begins to destroy this enzyme. Thus, an apparent internal stress, such as the onset of starvation, could generate this signal, which is secreted (perhaps by some moribund cells in the population) and primes the population such that some cells can be killed through the programmed cell death pathway when confronted with other stresses.

Other toxin/antitoxin systems exist in E. coli, and elucidating their roles and possible interactions will add to the fascination of this story. As it stands, this work already represents a very exciting chapter in the unfolding field of Microbial Sociology.

Thinking about these findings ecologically, we ponder where E. coli might be living for this pheno­menon to take place. The site must have enough E. coli cells living in close proximity to activate quorum sensing. The mammalian intestine may not qualify. E. coli is found in small  numbers in the lumen of the terminal ileum of healthy people and they may well be stressed there, although probably not for lack of nutrients. Is this population large enough for quorum sensing? Who knows! Going on down the GI tract, the colon seems an even less likely venue, given that E coli are minority inhabitants surrounded there by about a thousand anaerobes each. How about in bodies of water? Here, E. coli suggests fecal contamination because it is said to survive poorly in such environments and thus to be present only transiently (an arguable point). But the numbers are low here too. Sanitary engineers close beaches when the "coliform" count reaches a handful of cells per ml. What other possibilities does this leave us? Perhaps sites where E. coli acts as a pathogen. In the bladder, uropathogenic strains make biofilms; likewise for some enterovirulent ones. Given the variety of diseases caused by this organism, the choices are many.

We don't know enough at present about the ecology of E. coli to say much more. The question seems open and ready for creative experiments. We expect that such studies are or will soon be underway. For now, this phenomenon joins the long list of those that cannot easily be related to the organism's ecology. Fair to say, this is pretty much the rule: a huge number of physiological phenomena are waiting for a habitat. Such concerns, however, do not detract from the excitement of this particular work. In fact, it promises a bright future for the field of bacterial communication.