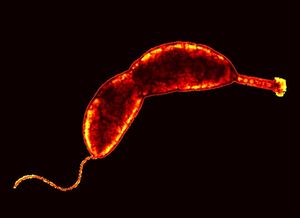 EM image of a dividing C. crescentus. The right cell has a holdfast, the structure in­volved in ad­he­sion; the left one, a fla­gellum. Photo courtesy of: Y. Brun/Cau–lobacter Microbial Cell Pro­ject. Source.

We recently posted a piece on Brucella abortus becoming more virulent when grown in the light, a puzzling finding if there ever was one. Like many other forms of life, B. ab­ortus has a flavin-binding light-sensitive protein do­main called LOV that is responsible for this phenomenon. So far, not many other functions can be attributed to LOV in bacteria, but one has come to light recently in a report from Sean Crosson's lab. In Caulobacter crescentus, a favorite of students of bacterial differentiation, LOV is involved in the attachment of the cells to various surfaces as well as to each other. Here, the LOV is a domain within LovK, a histidine kinase that is part of a two-component signaling system. Shining blue light on the organisms results in greater attachment, as evidenced by the cells aggregating to form large rosettes. The authors propose that "light is an environmental signal that can cue the Caulobacter cell on where it is positioned in the water column." Blue light penetrates water to a greater depth, thus providing an especially strong signal. Sticking to surfaces such as nutritional detritus may be a good thing – keeping food close at hand.

Surely, this is but one of many findings that will come to light from people doing such illuminating experiments.