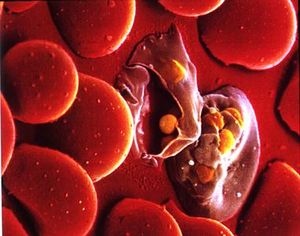 Type III secretion, the mechanism that introduces bacte­rial proteins into eukaryote host cells, rates among the most exciting themes of modern pathogenic microbio­logy. What makes it fascinating is both its biomechanics (it makes use of a fancy nanotechnology needle-like de­vice) and its strategic aspects (the delivered proteins, termed effector proteins, enable the bacterial pathogens to attach to or damage the host cell). This mechanism is widespread among bacteria, spanning animal and plant pathogens. The corresponding story for eukaryotic pa­thogens has come to light more recently. We find it pleasing that distantly related eukaryotic pa­­thogens also appear to share a common mechanism ­ a mechanism that involves eukaryote membrane gymnastics such as secretory vesicles, exocytosis, and endocytosis.

The malarial pathogen, Plasmodium falciparum, grows within a vacuole formed by an invagination of the cell membrane of its erythrocyte host. Thus, the effector proteins made by the parasite must cross two plasma membranes – those of parasite and host – en route to the host's cyto­plasm. Crossing the plasmodium's membrane is straightforward; the effector proteins have an endoplasmic reticulum (ER) type signal sequence that routes them into the parasite's secretory pathway and thus across the first membrane. For the second crossing into the host cell, these proteins have another signal, the host-targeting signal sequence (HT). More than 400 P. falciparum proteins contain this HT signal sequence and are thus thought to be destined for delivery into the host cell. This HT sequence is conserved across plasmodial sequences. (For a brief review article, click here.) 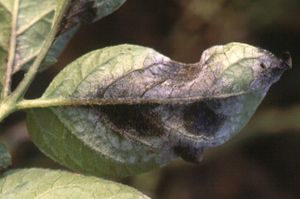 Now enters another villain – the water mold or oomycete Phytophthora infestans, the infamous plant pathogen that led to the Irish potato famines in the mid-19th cen­tury. During infection, it, too, delivers effector proteins across the two membranes and into the host cell. A re­cent report investigated how one such effector protein, Avr3a, is delivered into the plant cells. Suspecting that it might possess a host targeting sequence, the researchers modified the Avr3a gene, retaining the suspected signal sequence and adding a reporter gene known to work only inside plant cells. In this way, they demonstrated that Avr3a has an HT sequence that is required for trans­location of the protein into the host cells. The P. infestans genome encodes at least 169 (and perhaps more than 400) putative effector proteins with this HT sequence. 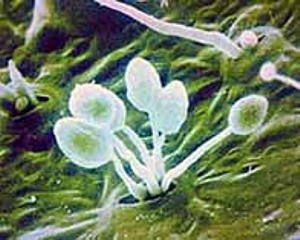 Another research group pulled these two stories togeth­er by demonstrating that the HT signal sequence from P. infestans can deliver the effector proteins of P. falcipar­um from the malarial vacuole to the host erythrocyte. The authors comment that their observations suggest "that deep branching eukaryotes belonging to distinct groups such as heterokonts (Phytophthora) and that alveolates (Plasmodium) share conserved pathogenic secretion strategies to access host cells across plant and animal kingdoms." Who would have thought?

From here, we could imagine that the same HT signals might be shared by still more eukaryotic pathogens, and following our imagination one step farther, might become the targets of a new class of drugs. Be­fore going too far, we have to add that it is not clear just how unrelated these two groups really are, but that is a story for another day.