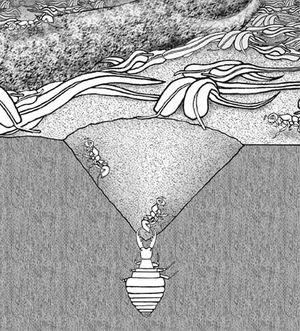 The antlion larva (Order Neuroptera, Fa­mi­ly Myrmeleontidae) captures its prey by trapping it in a steep, smooth-sided pit which it constructs by spiraling aro­und in fine-grained sand. The larva hides itself under a thin layer of sand and waits for passing prey to fall into the pit. When the prey falls in, its struggles to climb out loosens the sand, which in turn causes the prey to slide toward the bottom of the pit where the antlion larva awaits with open, spine-covered, mandibles. After seizing the prey, the antlion injects it with poison to induce paralysis and then proceeds suck out the body fluids. Source.

Antlions are insects, relatives of the lacewings, that snare ants by making conical pits in loose sand. An unwary ant or other insect slips down the treacherous slope, to be met by a partially buried antlion larva that is eager and ready to suck it dry. To ensure that the prey does not es­cape, the antlion injects it with a paralyzing neurotoxin. Surprise! The toxin was found to be a homologue of the otherwise-benign bacterial protein GroEL. A highly con­served protein, GroEL is a chaperonin that, together with GroES and ATP, protects bacterial cells during stress by ensuring that other proteins are folded correctly.

GroEL is present in the saliva of the antlion. How does it get there? It turns out that it is made by a bacterial sym­biont that lives there, Enterobacter aerogenes (otherwise known as a soil member of the enteric bacteria and an occasional pathogen of vertebrates). The amino acids of GroEL needed for the toxic action are far removed from the domains used in protein folding, so GroEL could serve both as a toxin for the insect and a chaperonin for the bacteria.

Not all GroELs are toxic to insects. In a cockroach assay, the toxicity of GroEL from E. coli was 1000 times less than that of its E. aerogenes homolog. The two proteins differ by only a few amino acids; changing those amino acids in the E. coli protein to match those of E. aerogenes did indeed increase toxicity. Neither protein is toxic to mice. This is far from being the first known effect of bacterial chaperonins on animals. In vertebrates, chaperonins of bacterial pathogens function as signaling molecules. They stimulate various cells to release compounds that elicit inflammation (proinflammatory cytokines). But determining that GroEL can also be a toxin is news, indeed. 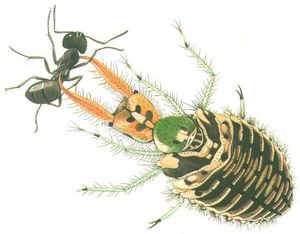 Antlion with its prey. Source.

Nature’s tools are often endowed with multiple functions. When you reach into its toolkit for a screwdriver, you may pull out a Swiss Army Knife, complete with several blades, a saw, and more.