« Pathogen On Board (River Blindness) | Main | Why Do Bacteria Filament? »

Gleanings – Genome Synthesized by Scientists. So What?

It gives us pleasure to host the translation of an article by Miguel Vicente that appeared in the Spanish blog, Esos Pequeños Bichitos.

It's in the news! The genome of Mycoplasma genitalium has been synthesized! Once again, Craig Venter’s group makes headlines. The excitement reminds me of a similar occasion – the day al­most eleven years ago when the existence of Dolly, the first cloned sheep, was made public. Re­sults like this trigger a variety of responses, especially in the realm of public opinion.

Artificial or synthetic?  First, we should attempt to define the true nature of the reported accom­plishment.

Is it, or is it not, an artificial genome? If we define artificial as something made by humans, the answer is yes; on the other hand, if artificial means something not present in nature, then we en­ter into a murky debate. What Venter’s team made is the genome from a natural organism into which they have inserted a few pieces from other sources. To avoid confusion, we might call it a "synthetic" genome. 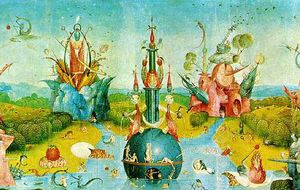 Next, we should explain that, for the time being, this syn­thetic genome is not to be found inside its parent micro­organism, Mycoplasma genitalium, but inside a yeast cell, instead. In consequence, it contains some added seg­ments to allow its propagation in the new host cell. Thus, we could clarify by calling it a chimera or a “hybrid” ge­nome.

It is not yet known for certain whether a hybrid synthetic genome can be maintained inside a cell similar to its par­ent without causing trouble. Experience shows that intro­duced changes, even minor ones, are apt to unbalance the recipient microbes, making them less efficient. Moreover, techniques do not seem to be available to remove those DNA segments that are alien to Mycoplasma from the synthetic hybrid genome without disrupting the integrity of the rest. Note that the larger the DNA molecule, the more difficult to manipulate it.

Yeast as coworker.  Actually, the scientists were unable to assemble DNA sequences containing half of the Mycoplasma genome in the "test tube". Even the assembly of half genomes in E. coli, a microbe more amenable to gene manipulation than Mycoplasma, failed. In consequence, the full genome was assembled inside yeast cells. Thus, the genome has not been synthesized exclusively in the test tube; the machinery used by yeast to manage its own genome came to the rescue. Ad­ditionally, for safety, one of the Mycoplasma genitalium virulence genes was inactivated.

Nevertheless, the technical advances achieved by these researchers and employed for the assem­bly of this synthetic hybrid quasi genome are unquestionable. It is reasonable to expect that fu­ture improvements will enable the team to produce a genome identical to the original.

Countless benefits and unforeseen evils.  Does this news mean, as headlines imply, that we are creating artificial life? My answer is no. Even if all the present shortcomings are resolved, the result will still be a copy of an existing genome. To invent anything different, it would be necessar­y – in my view – to deeply understand the role of each individual gene within the full set of genes in a cell, as well as all of their interactions. Moreover, the inventions may not prove to be better or more efficient than the naturally available items. This is not pessimism. Bacteria have already been testing all the possible ways to modify their genomes for 3.5 billion years. Since their intel­ligence is, if not higher than, at least more efficient than that of humans, it would be surprising if we can improve on them. Undoubtedly, it is feasible to obtain genomes tailored to thrive in speci­fic environments. While some will serve to remedy the predicaments of humankind, others will only worsen them.

Bacteria already invented it.  The usefulness of such "inventions" will of necessity depend on a know­ledge of how genes function in various genetic and environmental backgrounds, a know­ledge that in my opinion we still do not have in sufficient depth. Research funding has failed to target this as a priority. In addition to the headstart that bacteria have in this quest, there are other caveats. Proteins, the molecules that support the chemistry of life inside cells, can only adopt a limited number of structures for each given chemical function. Furthermore, biodiversity, and therefore adaptation to the environment, is not only a function of the individual biochemical reactions, but also of the global patterns of cell regulation. Regulatory mechanisms evolve by dif­ferent pathways than do individual proteins, and they also involve the added complexity of pro­tein-protein interactions. We are knee-deep in ignorance regarding these mechanisms.