« Talmudic Question #27 | Main | Gleanings Genome Synthesized by Scientists. So What? »

Pathogen On Board (River Blindness) 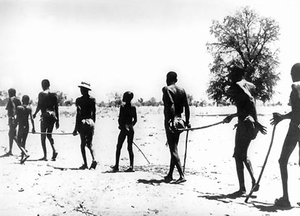 River blindness is a dreadful disease – the leading cause of blindness in tropical areas of the world. Its effects de­vastate the lives of entire villages. It has long been asso­ciated with infection by the filarial nematode, Onchocer­ca volvulus. The scarring of the cornea that leads to blindness was assumed to be caused by the inflamma­tory response to the worms. But the story turned out to be more intricate.

The worm hosts a bacterial endosymbiont, one of the ubiquitous wolbachias. Wolbachia are very good at being endosymbionts. They are found among many invertebra­tes, especially insects, where they can induce parthenogenesis and other alterations of sexual differentiation. (This is a story that we promise to revisit.) In some filarias, including the ones we are talking about here, the Wolbachia reside in the female reproductive tract and are essential for reproduction of the worms. Other types of filarias, including the pathogenic Loa loa, appear to get along without them.

New evidence suggests that, with regards to river blindness, the worm is an innocent bystander, that the real culprit is the Wolbachia onboard. In a mouse model, bacteria-free worms don’t cause disease, whereas those that carry Wolbachia do. Furthermore, Wolbachia inside living nematodes don't cause disease, either. Witness the fact that adult filarias can live in a human host for as long as 14 years without causing much damage. But when the worms die and the bacteria are released, damage ensues. Treatment with drugs that kill the worms results in fever and other signs of acute inflammation. 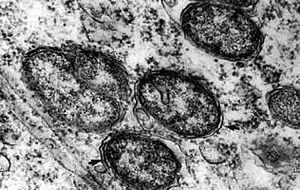 It's thought that the inflammation response is caused by an endotoxin-like compound in the Wolbachia. The reason for the uncertainty is that sequencing of the genome of another Wolbachia (also an endosymbiont of a pathogenic nematode) tells us that the endosymbiont lacks some 20 of the genes needed for lipopolysaccha­ride (endotoxin) synthesis. (As has been the case with other endosymbiotic bacteria, this genome sequence is especially interesting.) Nevertheless, there are several lines of evidence that point to something in Wolbachia that has endotoxin-like activity. For example, mice with decreased sensitivity to LPS (C3H/HeJ) are less responsive to Wolbachia extracts. In addition, it has been found that the injection of Wolbachia extracts leads to a rise in toll-like receptors that are involved in the inflammatory response. Clearly, river blind­ness results from the immune response to the worm's endosymbiont, but more details need to be uncovered before we understand just how Wolbachia causes damage to its host’s host. Putting all this together, it follows that the disease can be treated, at least in part, using antibacterial therapy. Filarias cause not only river blindness, but also elephan­tiasis and other diseases that affect some 200 million people worldwide, bringing untold misery. The prevent­ion and treatment of these diseases has been given high priority. The World Health Organization has targeted the elimination of the nematodes in a number of countries. Since the worms are transmitted from host to host through the bite of a black fly, insecticides are used along with a worm-killing drug, ivermectin. Their strategy does not seem to include treatment with antibacterial drugs, but this may yet change. The elimination of filaria-caused diseases would be a major health accomplishment and would remove this source of misery from the lives of countless millions of people in the years ahead.

The Wolbachia-filaria partnership is the only instance we know of an endosymbiont being responsible for the observed pathogenicity of its host. Can you think of others? (For those in the know, the Xenorhabdus-nematode case does not involve an endosymbiont. More on that some other time.)