Prochlorococci to the Head of the Class 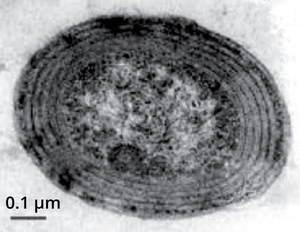 Since their discovery in 1988, cyanobacteria of the genus Prochlorococcus have been making up for lost time, go­ing from unknown organism to favored research subject. They are the smallest photosynthetic organisms known (0.5–0.8 micron in diameter), yet they represent 40% to 50% of the phytoplankton biomass in nutrient-poor (oli­gotrophic) regions of the oceans between latitudes 40°N and 40°S. They outnumber all the others, with more than 100,000 cells in a single milliliter. You can find them in the bright surface waters as well as 200 m down, where the light is one thousand times weaker. Within that range, they cope with varying temperature, pH, nutrient availability, and predators. One wonders how they fit all the necessary tools into their small genomic toolbox. Just how small is it? From 1.6 Mbp to 2.7 Mbp. That variation is a clue that prompts us to take a closer look at their genomes.

With the recent reporting by S. Chisholm and colleagues of the complete genome sequence of eight more Prochlorococcus isolates, the total sequenced to date now stands at twelve. Included in this dozen are members of all the known Prochlorococcus clades. Looking at those sequences side-by-side, the authors found that all twelve contained a core group of ~1,250 protein-encoding genes. Within this core genome, they could identify the genes responsible for virtually every cen­tral metabolic pathway, including those for synthesis of cofactors, chlorophylls, and all the amino acids. It is likely that these genes are about the minimum required for a free-living photosynthetic organism.

This core genome makes up only 40-67% of the genes in the various isolates. What about the other 33-60%? Those genes, termed here the flexible genome, likely reflect adaptation to special environments. For example, 257 of them are found in all of the high-light-adapted isolates where they encode several DNA repair enzymes and other proteins thought to protect photosystems from oxidative damage. More diversity is seen when comparing closely-related isolates, with the largest portion here likely encoding cell surface proteins and transporters. Often these genes are clustered on the chromosome in "genomic islands" – evidence of lateral gene transfer mediated by the abundant cyanophages.

The total gene pool of Prochlorococcus consists of more than 5,700 genes so far, and the number is rising. Every new genome sequenced adds another 150 or so genes to this pan-genome, sug­gesting that much more diversity remains to be discovered. The diversity already found is quite mind-boggling.

In this era, inundated as we are with a deluge of genome sequences, these data may seem like just a few more additions to an already long list. What makes this interesting is the insight this provides into the remarkable ecology and physiology of these organisms. As atmospheric CO2 levels continue to rise, Prochlorococcus is destined to become a household word.