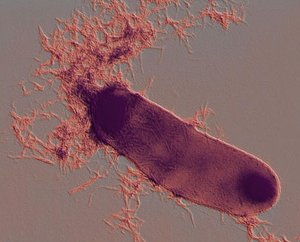 Prions are proteins of ill repute, as they keep company with "mad cow disease," Alzheimer's, and other neuro­degenerative maladies. But prions are not foreign patho­gens; they are alternative states of normal cellular pro­teins. Proteins behaving as prions typically assume a characteristic ß-sheet secondary structure and aggregate to form exceptionally stable fibers called amyloids. Small amyloid aggregates can act as "seeds." They recruit more protein molecules to join the growing fiber, a successful strategy that gets around the energy barrier that im­pedes de novo aggregate formation.

Biological systems appear to have avoided making amyloids, perhaps because they can easily get out of hand. Nonetheless, you might be thinking that likely there is an organism that uses amyloid fibers to good advantage.

Indeed, you don't have to look any farther than your own eyes. During differentiation of retinal cells, melanin is deposited on a scaffold of amyloid-like fibrils. The monomers that aggregate are produced on site by cleavage of a precursor protein. In bacteria, both E. coli and Salmonella use extracellular fibers known as curli fibers in the formation of biofilms and for attachment to host cells. These amyloid structures are not mistakes. The products of two distinct operons orchestrate their production, ensuring that the fibers polymerize at the cell surface rather than within the cell. 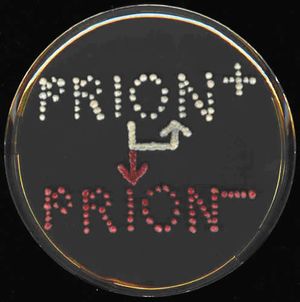 The [PSI+] prion can be readily monitored using an adenine-requiring mutant which has an aberrant stop codon in the ADE2 gene. Cells lacking prions require ade­nine and accumulate a red metabolite; cells with prions do not require adenine and are white or pink. Credit: Gary Jones, National Univ. of Ireland.

Most useful has been the finding of amyloids and prion-like proteins in fungi. In 1965, a class of nonsense-sup­pression mutations were reported in a yeast, Saccharo­myces cerevisiae (B. Cox. [PSI], a cytoplasmic suppressor of super-suppression in yeast [1965] Heredity 20: 505– 521.). These mutants, named [PSI+], showed a puzzling pattern of cytoplasmic inheritance. Unlike the case for yeast plasmids, inheritance here seemed not to involve nucleic acids. Decades later, when prions were identified as the infectious agents in mammalian neurodegene­rative diseases, the pieces in the yeast puzzle fell into place. During protein synthesis, the presence of a stop codon in the mRNA signals the completion of the poly­peptide chain and triggers its release. In yeast, this pro­cess is handled by a translation termination factor called Sup35. In [PSI+] cells, some of the Sup35 assumes an alternative conformation and aggregates into amyloid fibers-like a prion. Since the aggregated Sup35 is inactive, in [PSI+] cells, protein translation sometimes reads through a stop codon and keeps on going, adding additional amino acids-with variable phenotypic effects. The aggregated Sup35 is also passed to the daughter cells during budding, thus infecting them-like a prion.

The N-terminal domain of the Sup35 protein can be removed without any discernible effect on translation. However, that domain is required for the prion-like behaviors. So far, no other func­tion has been identified for it. A recent report demonstrated a striking degree of conservation of that domain in fungi as diverse as the Basidiomycota and the Euascomycota─fungi whose last common ancestor lived between 1 and 1.2 billion years ago. What might be the benefit? In the lab, under some conditions, the [PSI+] strains grow better than comparable [psi−] strains. Typically, between 1 in 105 and 1 in 107 yeast cells spontaneously switch from [psi−] to [PSI+]. Thus, in the words of the authors:

In the context of an individual cell, [PSI+] allows alternative heritable phenotypes to be encoded by a single genome. In the context of diverging populations it provides a vast array of new phenotypic states with unique growth advantages and disadvantages.