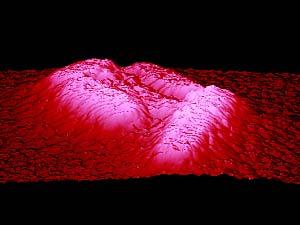 If you've ever longed to take a high resolution look at a bacterium in a biofilm under physiological conditions and to identify the cells at the same time, here is your chance. Technically-skilled researchers at the universities of Duis­burg and Mannheim in Germany have successfully mar–ried two techniques, atomic force microscopy (AFM) and fluorescence microscopy (FM), so that the same cells can be examined sequentially by both methods.

Notice the beauty of this complementary approach. AFM reveals fine details but not the identity of an organism, whereas FM can reveal its identity and chemical charac­teristics but can not provide high resolution. Others had already combined these two into one piece of equipment in a straightforward manner. They used an inverted optical microscope to view a translucent sample from underneath while visualizing the same sample with AFM. What's new in this report is the ability to use both techniques to study bacteria on opaque surfaces such as a rock, a metal pipe, a medical device, and – eventually – an epithelial membrane.

So, what’s the trick? It sounds simple enough. Construct a high precision shuttle stage that enables you transfer a glass slide from the stage of one microscope to another, and then relocate the same bacterium with an error of no more than 3–5 μm. No details for how to make this gadget are given, but one would guess that com­mercial versions will soon be forthcoming.

Combined AFM and EFM images of a bio­film sample of cells of A. ferrooxidans A2 on pyrite, stained with DAPI. (A) AFM scan in air. (B) EFM image of same sample location. Scale bar, 5 μm. Source

This report illustrates their initial results when visualizing the metal sulfide-leaching bacterium, Acidithiobacillus ferrooxidans, as it was adhering to a sample of pyrite (FeS2). A. ferrooxidans is a major player in the commer­cial extraction of mineral ores by bacteria as well as con­tributing to the production of acid mine drainage. The authors propose that such investigations will help eluci­date the interactions between bacteria and their sub­strates. However, such attached specimens are better observed in air than in liquid, because the AFM probe can displace many of the bacteria in liquid. This troublesome effect can vary depending on the kind of bacteria and the properties of their extracellular poly­mers. Likely the future will see ways to get around these problems, thus allowing the close study of a bacterium – even one in a biofilm – under physiological conditions.

The authors further propose that their shuttle stage could be used to combine the use of other instruments. They mention promise for fancy sounding measurements like charge differences on the surface of biological materials by a Kelvin probe or the quantitative mapping of elemental distributions by synchrotron X-ray fluorescence microscopy.

But that's not all. Rumors are abroad that the genome of a single bacterium can be sequenced. Imagine that – grabbing a single prokaryote from an environmental sample and deciphering its particular structure, physiology, and genetic make-up. It may well be possible.

Biological imaging, in its various glorious forms, seems to have arrived in a big way. Groucho Marx is quoted as saying: Well, who you gonna believe, me or your own eyes? Our own eyes are coming of age.